"The Tudor Secret : The Elizabeth 1 Spymaster Chronicles" by C.W. Gortner 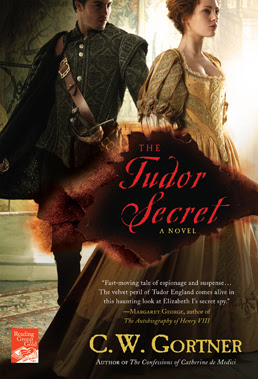 * * * *
I am a real fan of C.W. Gortner's work and was thrilled to be given an opportunity to read and review this latest book. This volume, the first of a chronicle series, introduces us to the character of  Brandon Prescott. Brandon was found as a newborn and was taken into the Dudley household by their herbalist and nurse, Alice. The Dudley family is wealthy, powerful& avaricious. Close to the boy King - Edward VI - the Dudleys have wielded their power over the throne and are poised to keep Henry VIII's daughters Mary and Elizabeth from ever reaching the throne by marrying their youngest son, Guilford, son to Lady Jane Grey (daughter of Henry VIII's sister, Mary). Jane was, of course, later called the 9 days queen - which tells you what happened to the grand Dudley scheme.
Brandon is brought up in the midst of the Dudley family; treated as an orphan and scape goat of the Dudley boys, but, when the family is away at Court, Brandon  has access to the many books owned by the Dudleys and schools himself in languages and history. Suddenly Brandon finds himself packed up and on the way to Court to serve as Robert Dudley's squire as payment for his upbringing. As soon as he is presented at Court he quickly becomes embroiled in a game of power and politics. An overheard comment that he "bears the mark of the Rose" brings back the pain of not knowing who his mother. Brandon wonders what the comment - and the hidden birthmark on his thigh- mean. Does someone know who his family is? Brandon begins to search for answers to his lineage. He learns to live by his quick wits. When he is introduced to the Lady Elizabeth he quickly becomes aligned with her & aids her as she seeks to gain access to her dying brother, Edward, in order to say good-bye. Access to the dying boy king was rigorously controlled by the Dudley clan, but Brandon plots a scheme to allow Elizabeth to see her brother. Along the way, Brandon is kidnapped, and ultimately brought to the home of William Cecil who sets him a task and enmeshes him in the world of spycraft. Sir Fracis Walsingham is portrayed as a shadowy figure whose presence adds to the winding turns of the plot. The true heir to the throne of England after Edward is Mary, and she finally discovers that her brother has died - the Dudleys did not make that information public for some time after his death - and gathers her forces to march on London to reclaim her crown from Guilford Dudley and Jane Grey.
This book is not as large a book as C.W. Gortner's earlier historical novels about Juana of Castile (The Last Queen) and Catherine de Medici (The Confessions of Catherine De Medici), nor is it, perhaps, as historically based. That being said, it does, indeed, carry the true flavor of the time,speaks of real persons, events and history and you don't have to reach reach too far to see how the plot could have been plausible.  Who is Brandon Prescott (answered in the book)? How does he come to work for William Cecil and what will his next assignments be? This book really sets up the series and I can't wait for the next volume!
This is another winner for Mr.Gortner and I am now eagerly awaiting the next book in this chronicle series! Any C.W. Gortner fan, historical fiction fan or Tudor fan will be thrilled with this excellent read!
PS: If you have not yet read C.W. Gortner's other books - give yourself a present and read them. They are both 5 star'ers in my book ! Historically accurate, incredibly well written - just great reads!
note: this book was provided to me by Amazon for the purpose of an honest review. No other remuneration was received.
Posted by mzjohansen at 8.1.11

Describes essential steps in the writing and composing of two most popular types of the essays- Process essay and personal statement essay.

Ike numerous different online journals this is additionally a vital blog for the perusers. so individuals who are intrigued both with regards to navigate here and in web facilitating work should peruse this blog with finish care and intrigue. It is on the grounds that this blog is much fascinating and enlightening.

This blog is made on the essentials out of culture and legacy. Such kinds of online journals are extremely exceptionally amazing and critical for the paper composing understudies. I simply like thishttp://www.paragraphtool.com/ blog since it is about the way of life and legacy. These things are essential in our lives with everything taken into account.