"Bring It Close" by Helen Hollick 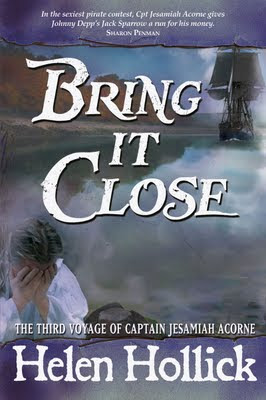 * * * * *
In the third volume in the 'Sea Witch' series we learn that pirate Captain Jesamiah Acorn  has accepted  amnesty from the Governor but finds that the amnesty has not allowed old rifts to mend. He still has enemies - among them the infamous, sadistic pirate Edward Teach - better known as Blackbeard - who has an issue to settle with Jesamiah.  After a misdirected and impulsive tryst with a female acquaintance  Jesamiah returns home only to discover that, Tiola, now his fiancée, has  traveled to  North Carolina to assist with an imminent, likely difficult, birth. Jesamiah wants to go to Tiola but has one large problem - Edward Teach lives in North Carolina and going to find Tiola might mean a serious wrangle with the vindictive pirate.
Teach must not discover that Tiola is pledged to Jesamiah and she must cloak her identity and her 'gift'. In a deal made long ago -Teach's soul belongs to the devil and Tiola must hide her powers in order to survive her chance meetings with Teach and to protect Jesamiah who has been wounded by Teach and has taken refuge at his family's home in Virgina. The plot twists and turns as it winds it's way through this story of love, a family's dark history, treachery and, ultimately some peace - before the seas of life turn wild once again.
To quote from Ms. Hollick's website - for who can say it better than she?
"....How is Jesamiah Acorne to clear his name, overturn a sentence of hanging, keep Tiola safe, put an end to Blackbeard and deal with being haunted by the ghost of his father? Bring It Close moves from the Bahamas to North Carolina and Colonial Williamsburg in Virginia at a swashbuckling pace. There is intrigue, misunderstandings, romance and adventure all wrapped up in a delightful blend of mystical fantasy....."
Oh did I not mention the fantasy?! It's one one of the things I like best about this series - and this volume in particular. The classic battle between good and evil is played out through the powers of Tiola - the 'white witch" and healer and the dark, dominating, malevolence of Blackbeard's diabolical mind. The whole series is filled with a hint of magic...and that's one of the elements that I love the best about this series: the fanciful aspect that, understated as it is, is a palpable element that runs throughout the series.
I can't speak highly enough of Helen Hollick's work. She is a master story teller - whose plots are well paced, filled with action, adventure, romance and yes, a bit of magic too. You will find yourself wanting to read more of her work and you will, most assuredly, be sad when this book ends. A sequel is in the works though - so we may not be sad for too long!
Now - leave a comment and I'll have a drawing - the prize is a signed copy of "Sea Witch"  from the author to you - just to whet your reading whistle!
Posted by mzjohansen at 21.7.11

Sounds like a motivating journal. thanks for the giveaway and your knowledgeable writing makes me an everyday readr of yor journal. http://www.shouldlooklike.com/how-does-an-essay-look-like/ then none will do the higher search than you and solely you'll facilitate yourself.

Every university is admittedly serving to student on the medical website and this can be why the scholar continually love their field then on. If these ways in which may facilitate American state to scale back my college work thenclick here for more and you'd in person provide you with thanks.

The book by the Helen Hollick is making the true sense for the bettr life of the people. Make your voice with https://www.rewordinggenerator.com/reword-my-sentence-online/ and enjoy the better treatment with this zone of the true perfection. Enjoy the real rate of this moment.

There is the willow tree with the help of which you can see the crow designs. You can get the better link with http://www.paragraphchanger.com/ and can move straight with the nice option of the Helen Hollick. You can also find the best challenge with this zone.