"At The Mercy Of The Queen" by Anne Clinard Barnhill 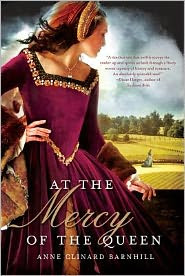 * * * * *
I was intrigued by the prospect of reading this book because it presents the oft told story of the rise and fall of Anne Boleyn from another perspective - that of her cousin and maid-of-honor, and confidant, Madge (Margaret) Shelton I wondered if there was really another angle that would be compelling enough to make for a good read.

By my 5 star rating you can tell that I found that the book really did offer a fresh, new view. Madge Shelton was in a very unique position in the Court of Henry VIII.

Arriving from from the country as a young girl, Madge was innocent of the vagaries and morals of Court life. Her nickname at Court quickly becomes  "Pretty Madge" and the reader follows her story as she rebuffs the admiring courtiers and soon becomes Anne Boleyn's closest confident and champion.

Madge becomes swept along in the story of Anne's determination to be wife of King Henry and, later of Anne's desperate attempts to fulfill her royal duty of filling the royal nursery with make heirs - as her predecessor, Katherine of Aragon had failed to do  - a failure that led the Country though religious wars and the dismantling of the monasteries.

As Anne desperation for a son becomes the only focus of her life she hatches a plan to lure the King into an affair with Madge's; proffering her beauty and charms as bait in order to keep the the King from courting the King's current paramour, the milk faced Jane Seymour. Not long before Anne devises this plan to have Madge lure the King into an affair Madge herself has succumbed to lure of love - falling in love with a handsome, well placed Courtier named Charles Brandon who Madge initially called 'Sir Churlish'.

As the the story turns towards the final downfall of Anne Boleyn Charles exhorts Madge to leave with him so that they can be married and stay away form the increasing dangers of the Court. Madge's love and commitment to Anne force her to remain with Anne until the hour. Did Madge wait too long? Did she lose the love of her life by remaining true to Queen Anne?

This book is well written and well paced. The plethora of factual historical references keeps the flavor of the time - allowing the reader 'feel' as though they can 'smell' and 'be' in the book as a participant. The fact that Ms Barnhill can take a secondary historical note and create such a riveting story from it is surely testimony to her skill as a writer. This is her first book - and I am looking forward to more !
Posted by mzjohansen at 11.11.11

You know that he's very far better writers and folks very like to scan him. I hope briefly time we are going to get additional some writing to scan. read more and visit the website wherever you'll realize essay extender service.

You should not simply hunt for the variations rather you would like to search out the advantages. you must hunt for the higher choice for academic facilitate. http://www.howtoparaphrase.net/the-5-best-tips-on-how-to-rephrase-text/ and this website link can provide you with the simplest personal statement writing service.

Thanks for such quite sensible writing and posting. I really like this weblog post. I trust your writers will learn from this post. During this article http://www.verbosegenerator.com/about-our-text-inflator/ you may understand innumerable things regarding the education propose.

Amazing blog post,I read bunches of stuff about the essayist however I never perused this sort of the stuff in as long as I can remember and here is esy to browse visit page for unique task. As an author, you need to oversee bunches of the things and you need to fathom these little things.

With the mercy of the better challenge you can find the new crow designs. Just move ahead with click here and get the best field of the descrimination. You can also get the new designs with the nice pattern.