"Sister Queens: The Noble, Tragic Lives of Katherine of Aragon and Juana, Queen of Castile" by Julia Fox 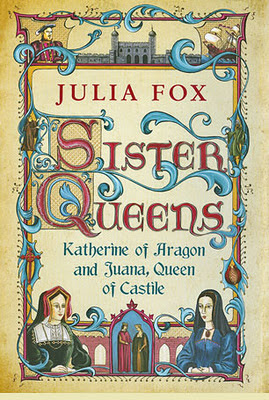 
I have been a fan of Julia Fox's writing since the publication of "Jane Boleyn". I was thrilled when I saw that her new book, "Sister Queens" was being published and jumped at the opportunity to read it.

Once again, Ms. Fox does not disappoint. This is a history book that reads as fluidly as fiction and her writing style can make you feel as if you are a participant in the history. A lot of the book is about Katherine of Aragon - in part I think because there is more extant historical documentation about Katherine's life than there is about Juana. I fell in love with the impetuous Juana when I read C.W. Gortner's historical novel "The Last Queen" - so I was even more happy to read some of the history behind the fiction in Julia Fox's book.Ms. Fox has carefully researched her subjects, cites historical documents, and covers the journey of these two women thoroughly - seamlessly weaving the threads of their lives taking you on a time traveler's glimpse into the time period and the other historical figures who formed the frame work of these women's lives. I've learned a lot from this book - and was entirely enjoyable. The author has a way of recounting history that makes some of the more cloudy history and relationships make sense and fall into place - no small feat with some of the more convoluted names and titles of British Aristocracy!

This book is enthralling and, for me at least, it was a book that I could not put down. I highly recommend this book for any history buffs like me, Tudor fans, or biography-philes. it's an excellent read!

This from Julia Fox's web site:
Katherine of Aragon, Henry VIIIs first bride, has become an icon: the betrayed wife, the revered Queen, the devoted mother, a woman callously cast aside by a selfish husband besotted by his strumpet of a mistress. Her sister, Juana of Castile, wife of Philip of Burgundy and mother of the Holy Roman Emperor Charles V, the most powerful man in Renaissance Europe, is still more of a legend. She is Juana the Mad, the wife so passionately in love with her husband that she could not bear to be parted from him even by death, keeping his coffin by her side for year upon year.

They were Sister Queens the accomplished daughters of Ferdinand and Isabella, the founders of a unified Spain. While their royal birth conferred entry into a world of privilege and plenty, it came at a devastating personal price. Since monarchs played their parts on an international stage, it was inevitable that the formidable Ferdinand and Isabella would send their children abroad as dynastic pawns. Katherine and Juana needed all their courage, resolve and inner strength as they confronted the harsh realities of life in a male-dominated world.

A gripping tale of love, sacrifice, the demands of duty and the conflict between ambition and loyalty at a time when even royal women had to fight for their positions in society Julia Foxs vibrant new biography teems with life. By placing Katherine and Juana squarely back into their family and Spanish contexts, she takes two remarkable women out of the shadows of the powerful men around them, showing us who they really were, how they coped with their setbacks and successes, how they gained the values by which they lived and died. Linked not only by blood but by cruel experience, their dual stories enrich our understanding of them both, casting a searchlight onto the turbulent age in which they lived.

and this from the Amazon web page :

The history books have cast Katherine of Aragon, the first queen of King Henry VIII of England, as the ultimate symbol of the Betrayed Woman, cruelly tossed aside in favor of her husband’s seductive mistress, Anne Boleyn. Katherine’s sister, Juana of Castile, wife of Philip of Burgundy and mother of the Holy Roman Emperor Charles V, is portrayed as “Juana the Mad,” whose erratic behavior included keeping her beloved late husband’s coffin beside her for years. But historian Julia Fox, whose previous work painted an unprecedented portrait of Jane Boleyn, Anne’s sister, offers deeper insight in this first dual biography of Katherine and Juana, the daughters of Spain’s Ferdinand and Isabella, whose family ties remained strong despite their separation. Looking through the lens of their Spanish origins, Fox reveals these queens as flesh-and-blood women—equipped with character, intelligence, and conviction—who are worthy historical figures in their own right.

When they were young, Juana’s and Katherine’s futures appeared promising. They had secured politically advantageous marriages, but their dreams of love and power quickly dissolved, and the unions for which they’d spent their whole lives preparing were fraught with duplicity and betrayal. Juana, the elder sister, unexpectedly became Spain’s sovereign, but her authority was continually usurped, first by her husband and later by her son. Katherine, a young widow after the death of Prince Arthur of Wales, soon remarried his doting brother Henry and later became a key figure in a drama that altered England’s religious landscape.

Ousted from the positions of power and influence they had been groomed for and separated from their children, Katherine and Juana each turned to their rich and abiding faith and deep personal belief in their family’s dynastic legacy to cope with their enduring hardships. Sister Queens is a gripping tale of love, duty, and sacrifice—a remarkable reflection on the conflict between ambition and loyalty during an age when the greatest sin, it seems, was to have been born a woman.
Posted by mzjohansen at 8.1.12

You need to remain with the ethics all the time as they're creating things well regarding the education propose. good service for your own helpful sector of copy checker or writing services.

Agreed!! i really like the quote what concerning you writing here. positively getting ready to be a method and a few give tongue to and perhaps some crying occurring. You should homepage to understand concerning the standard of educational writing services.

The sounds is nice, would like to browse it. There you would like to grasp some regular facts on writing the literature aspect tho'. this page http://www.rewriters.biz/efficient-rewriting-services-we-offer/ words and he virtually says all of these asked question whereas individuals rather wished to cover.

Excellent post,In my view, films are the form of the books and here is esy to browse http://www.paraphrasemaker.com/ for unique task. Books comprising of the story which just through composition yet in the movies, you need to act as indicated by the story.

Good post,All things considered, this scene is so one of a kind and you endeavor to be straightforward in an absolute first scene which is so astounding and here is esy to browse you can try this out for unique task. A few points are so fascinating and individuals ought to demonstrate these focuses.