'All The King's Cooks: The Tudor Kitchens of King Henry VIII at Hampton Court Palace" by Peter Brears 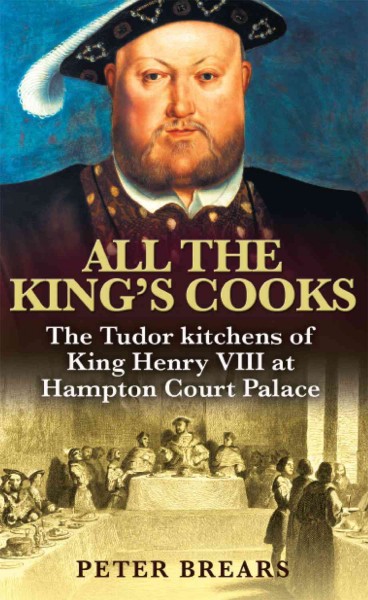 This is an absolutely fascinating little book - well maybe not so little - about what it was like to supply food and beverage to the legions of court followers during the time of Henry VIII. I think we think little of what it was like to work in the kitchens and cellars of this vast Palace and how it was that the thousand upon thousands  of people who attended the Court daily were wined and dined.

The books takes on a well written, easy to read look at the legions of workers and ingredients that were required each day.

The chapters, as laid out in the geography of Hampton Court) include:

The book opens with a detailed diagram of The Kitchens at Hampton Court Palace with each area delineated on a numbered chart. That alone is pretty fascinating!


Cooking on this scale is something that none of us can really appreciate. Meals were served in what were called 'messes' - which got me to wondering if that is where our modern term "mess hall" came from. Different messes were meant for different groups and each group was allotted a certain amount of food and beverage a day - obviously the higher your rank the better, and greater quantity of daily sustenance, you were given.  There were maximum provisioning prices set per person - and the personnel of the Green Cloth were given a monumental daily task of working within their budgets to supply the ranks with their vittles!

The book is illustrated with many black and white images and a selection of color photographs that include Hampton Court Palace and the entrance to the Green Cloth area, photos of recreations of  Tudor fare and kitchen workers. I think that Tudor era confections are what truly amazed me the most. I have always been a marchepane fan but the Tudors did their sweets with style! Finely detailed figurines of knights and ladies - all colored to perfections. I think I might have wanted to collect these sweet treats rather than eat them!

I found this to be a fascinating book that should hold wide appeal for historians, Tudor fans and gourmets. The only thing that could have it better would be more color photographs! It's really an amazingly fun read!

All the kings of the kitchen are readily involved in the scheme of the cooking. You can click now for the attachment of the passages. The induction is marked for the enhancement of the objectives in life.

A new link of the skills which can be really great for the work of yor attention. Get the new and suitable designs with this helpful site and enjoy the new path of the better direction. You can find more books here.

Thanks for sharing such type post,You give the great direction to the general population and I simply need one thing is that you need to gain proficiency with the things but you can check out http://www.onlinerephrasing.com/ for all type of thesis work. It doesn't make a difference what sort of the material you read.

Thanks for sharing such type post,This is extremely so imperative occasion for the agents and everyone should join this occasion to think about the innovation and digitization and here is esy to browse look here for unique task. Each agent needs to digitize their business and it is imperative.