"Mistress Of Mourning" by Karen Harper 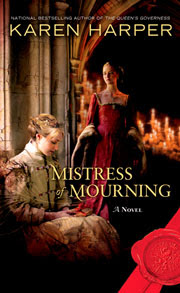 I'm a past fan of Karen Harper's books - so I had "Mistress of Mourning" on pre-order and, as luck would have it, I had a break in my "must-read's" when it was released and I decided to delve right into this excellent read. I found it to be a fascinating book that ended all too soon.

Although this book is most definitely a historical piece of fiction the historical notes on chandlers (wax workers), their guilds and ritual duties during the Tudor period was fascinating stuff in and of itself. This book is also a romance but the romance part of the book was woven into the narrative very skillfully and produced a a solid plot line with the romance part being believable and highly readable - not suger sweet or over-the-top oohhhhinh and ahhhing's.

The plot involves Queen Elizabeth of York - the wife of the infamous Henry VII, and the chandler (wax worker) Varina Westcott - a widow with more autonomy than the age normally allowed for women. Varina's love interest is one, Nicholas Sutton, an ambitious and loyal servant to the Royal family. The tale includes pieces of the story of the 'princes in the tower', Elizabeth's two brothers whose deaths in the Tower are a mystery to this day, and two of her children who died in infancy - as so many babies were in those days. Varina is a master chandler (wax-worker) who has an uncanny ability to carve wax into, besides beautiful pillar candles and beautiful angels, uncanny likenesses of people. The Queen has used Varina's talents to fashion likenesses of her departed brother's and children but Varina's greatest mission has yet to be assigned.

When Arthur, Prince of Wales, the Queen's eldest son, dies suddenly after only months of marriage to Catherine of Aragon, Varina and Nicholas are sent on a secretive mission to investigate the death and bring their findings back to the Queen. Was Arthur's sudden demise from an ague really as simple as that or was it something more sinister? Was a murder plot involved?

You'll have to read the book to discover the answer - but I do believe that you'll enjoy the reading of this book very much. Entertaining from start to finish, this book will appeal to historical novel fans, Tudor fans, romance fans and anyone else who enjoys a good murder mystery and a highly enjoyable book!

A person discuss the actual visit website piece entails Full At the associated with You are able to the actual spouse from the notorious Holly VII, and also the chandler the widow with increased autonomy compared to grow older usually permitted for ladies. Varina's adore curiosity is actually, Nicholas Sutton, a good driven as well as faithful servant towards the Regal loved ones.

you are going to take pleasure in the studying with this publication quite definitely. Engaging coming from learn to end, this kind of publication can interest traditional story followers, Tudor followers, relationship followers and also someone else which loves an excellent killing puzzle plus a very pleasurable publication!You may check it at http://www.essayparaphrasing.com/choose-paraphrasing-services-for-any-task-you-have/.

So great getting to know everyone more effective. A lot of superb daily life you will have suffered and with to come back. Really enjoy any excerpt. Perfect chooses. Visit here http://www.reworder.net/efficient-rewording-sentences-help/.

Your services are really good.Once I got to read about your business values in an essay writing www.freepunctuationchecker.com blog and that actually impressed me a lot.Thanks.

Very well presented and the information is interesting.. I would like to take part in this www.pronounchecker.com award ceremony and will look into the winner of this awarrd. the books listed are some of my most favourite books of all times.