The Dressmaker by Kate Alcott 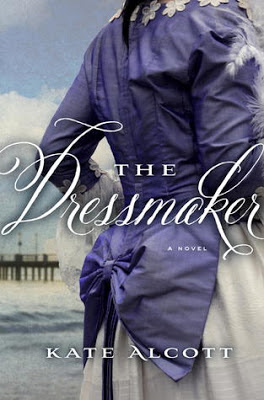 I wasn't quite certain what to expect when I began reading this debut historical novel by Kate Alcott book, but since I have a yen for the turn of the 19th century (prior to WW I) I thought I'd give it go. I was most happily surprised with an excellent read that is historical fiction at some of its best.

The book begins as a young Tess Collins flees from the home where she is employed doing menial labor and stitching for the family of a vexing, sexually groping teenaged boy. Determined to better herself, and become the dressmaker that she dreams of becoming, Tess rashly flees the house and heads to the dock where the Titanic is tied up, waiting to begin her ill fated voyage to America and the history books. Somewhat easily, Tess wrangles a position as a lady's maid to the famous designer, Lady Duff Gordon (aka Lady Lucille) and quickly finds herself surrounded in a luxurious world of good food, designer clothing a soft bed, kind gentlemen and an imperious mistress. On board Tess makes the acquaintance of an interesting, well dressed,well mannered handsome man, Jack Bremerton. She also becomes friendly with a sailor named Jim.

From this point the book covers much of the usual Titanic fare. The iceberg and the ill trained staff, the life boats that launched half empty and the flailing and screams that came from the tortured waters. Tess and the Duff-Gordons are separated and wind up in separate life boats. Eventually rescued by the crew of the Carpathia the story picks as the differing tales of what really happened in those life boats begins. Tess imagines that the fascinating Jack did not survive as there had been no word of him. Jim and she meet on the deck of the Carpathia, both had survived.

Upon arrival in New York the few surviving passengers and crew begin to pick up the remnants of their lives. Tess moves with the Duff-Gordons to the Plaza hotel and is hired to be 'an assistant', rather than a maid, in Lucille's dress atelier. Jim manages to locate Tess, and they discuss those fateful hours together. Jack Bremerton is, indeed, found to have survived the tragedy. He finds Tess and begins courting her. A female reported for the New York Times called Pinky becomes involved with the investigation, and befriends both Tess and Jim. Ultimately, the Senate becomes involved in the investigation and survivors and crew are called upon to testify. There are allegations that Lady and Cosmo Duff Gordon bribed the sailor to not go back for more survivors and that they pushed people back into the sea fro fear that they would be swamped in the effort.

The cast of characters is well rounded and well fleshed out. The 'unsinkable' Molly Brown is also one of the characters in this novel. What I really liked about this book is the historical portrait of the times that it provided. The suffragette movement and women's rights for equal pay were in full swing during this time period, as was the beginning of the industrial revolution. The times were changing, and the people were trying to adapt to the world that I think they felt was becoming out of control. This book presents not only a portrait of a tragedy it amply provides a fleeting glimpse of what the world was like during these precious pre war moments... it was a time on the brink of change and this book brings you into the time and the place quite well.

I found myself fully involved in these characters and in the times in which they lived. Ms. Alcotts presentation was flawless and I look forward to her next book!
Posted by mzjohansen at 5.3.13

You can find more books by the willow tree and can get the real phase of your life from this great field. Get the new phase of work with http://www.articlesummarizer.net/summarize-an-article-is-easy-with-us/ and enjoy the new designs with the better working zone of this field.

There is the new sense of the books with the help of which you can find the better design. Enjoy the new zone of contact and get the better feelings. With the link of http://www.freepunctuationchecker.com/punctuation-correction-tool-to-improve-your-text/ you can enjoy the better direction for your work.

There is the link of the dressmaker with the help of which you can find the new designs for your life. You can also cover the new style of your life with the useful link and can arrange the nice meeting here.

The link for the dressmaker is waiting for your life. You can really get the musing crow designs with the special package. You can easily click here and can see the willow tree with the real effort of your life.

There is the nice option of the dressmaker which can give you the nice treatment. Find the new link with www.sentencecorrector.biz/well-known-sentence-punctuation-corrector and see the Kate Alcott as the new dressmaker. Just cover the best conditions of the life here.