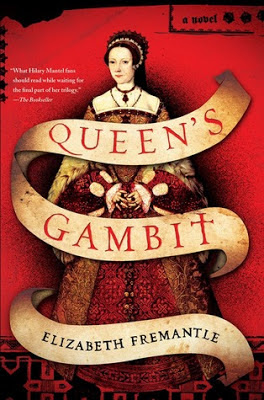 At last ! An novel about one of the least well known, but most fascinating of Henry VIII's Queens; Katherine Parr.

Elizabeth Fremantle has finally done justice to this most enigmatic, free thinking, spirited Queen. Reading this book was a thoroughly satisfying, extremely entertaining read, that I was loathe to put down and sorry when it ended!

The book goes far beyond the usual fare that tell the story Katherine Parr's life. Generally we know her only as the last wife of the saint/monster King, Henry VIII. Sometimes we hear about Katherine's prior marriage to Lord Latymer (Latimer), but seldom do we hear more of the story of this most illustrious Queen.

Katherine Parr was an extremely learned woman, in a time when the education of women was not very much encouraged.  Katherine was married and widowed not once, as most tales tell, but twice, and both times at a young age. She was the young wife of aged men who needed a nurse maid more than a wife. Katherin Parr's mother had been associated with Henry's first Queen, Katherine of Aragon and, Katherine Parr was a member of Princess Mary's household at time of her husband, Lord Latimer's death. It was during this time that Katherine Parr caught the eye of King Henry VIII who, at that time, was aged himself and suffering from complications of his ulcerative leg wounds. He too needed a nurse, and one that was amiable and light hearted. Henry appreciated Katherine Parrs intelligence, but she came to great peril, to the extent that Henry issued a warrant for her arrest over her reformist views. It was by chance that the warrant was intercepted before it could be served - gaining Katherine the opportunity to restore herself to the King's affections before any harm could come to her.

Following Henry's death the book go on to chronicle Katherine's passionate love affair with the elegant and worldly Lord Thomas Seymour, for whom she had long held a torch. After marrying in secret they form a household dedicated to the instruction of young, titled wards. Princess Elizabeth and Lady Jane Grey were two of those who benefitted by being under the care of Katherine Parr and her husband, Thomas Seymour.

Katherine becomes pregnant, a blessing that she had never anticipated being possible for her. Thomas with some complicit agreement with Katherine, makes merry with the young and attractive, and somewhat vulnerable Princess Elizabeth. After some time, and repeated protestations from Elizabeth's nurse, Kat Ashley, that Thomas' involvement with Elizabeth was becoming unseemly, the dowager Queen Katherine has Elizabeth moved to another residence, while Jane Grey remains behind. Jane Grey ultimately, becomes Katherine's chief mourner when she  dies not long after giving birth to her daughter. Not much remains in the history book of what become Katherine's much longed for daughter, Mary (named for Princess Mary).

This book is well researched, very well written and is gem to read. It will hold much appeal for a wide variety of readers; historical fiction fans (especially those who are Tudorphiles or British history buffs), general fiction readers, possibly romance readers and anyone who enjoys a really good book that you are sorry to see end. I really don't think that you will be disappointed in any way with this riveting read!

I eagerly await Ms. Fremantle's next offering!
Posted by mzjohansen at 4.5.13

Katherine was hitched and widowed not once, as most stories tell, but rather twice, and both times at a youthful age. She was the youthful spouse of matured men who required a medical caretaker servant more than a wife

This story in not so old. But this is a true story of a queen. I read this story and this is so interesting for me. And I hope everyone will enjoy to read this story. So please read this book and enjoy this.

Everyone cant write well. This is a very hard work and this will not easy ever. So if you want to be an writer then you have to be the perfect on this. So this story will be the best for me and this is the good to maintain a site also.

I know about this well enough. This site can be the best for student of writing. And who are writer. In this time this site is so popular for the service. so please visit this site for the help that you want.

You can now get the professional grammer checker on the online note. You can easily check your text with this platform and can find the best challenge with https://www.grammarcheckeronline.org/professional-grammar-checker-online-free/ which can be really good for your working area.