"A Triple Knot" by Emma Campion aka Candace Robb 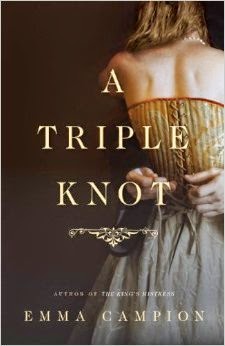 Oh my! It's been way too long since I have posted ! Sincere apologies. Life just took me away, and the days pass so quickly. I have been reading a lot though and some more reviews t do soon. On to the review of this most excellent read....

I had a hunch that I would like this book when I received it, but one never knows does one! Emma Campion is a pen name for Candace Robb who has a host of earlier historical novels to her credit. As Emma Campion she also penned the excellent, to my mind, noteworthy, novel "The King's Mistress" which is a novel based on the story of Alice Perrers, mistress to King Edward III.

This is the story of Joan of Kent who was the niece of King Edward III. Joan, who was considered quite a beauty in the middle ages, fell in love for all the right reasons with Sir Thomas Holland. He was, unfortunately, much older than she , and he was also below her in rank. This match was challenged and she was forced into a second, loveless marriage to another nobleman who was chosen by the men in her life who used her as a political tool. Her second husband and her cousin, The Black Prince, all refused to allow her to return to Sir Thomas, who was, in reality, her legal husband.

This book covers the prolonged, political battle that is waged in order to support her claim that her marriage to Sir Thomas should be legally upheld. The struggles that Joan and Sir Thomas had in maintaining their love throughout their struggle is well depicted and the characters in this book are well developed. The dialogue flows smoothly between characters and scenes.The political forces of the time are highlighted and the daily life in medieval times is well presented and is quite historically correct.

I thoroughly enjoyed this read, and had to read it straight through. I look forward to more books under this pen name, and I can recommend this book to all lovers of historical fiction - or fiction in general!
Posted by mzjohansen at 26.6.14

Whatever the book cover is this bookkmhave become wow factor among readers. I am also loving this book and will appreciate the author for such work. So people visit website for such ana amazing collection.

Awesome book! I really appreciate the effort of author who always chose some of the best topic. This is script writing which allows users to have www.scriptwriting.biz/how-to-be-a-comic-book-writer/ for more kinda writing.

Nice blog post, Preparing has made the lives less requesting and it has enabled us to progress in each field of life in light of life through our understanding by getting guidance. By and by visit homepage at whatever point and wherever you need forming support.

Just check out here if anyone wants to help in writing novels and dramas. Our professionals are working on it.

I got best ideas here to know how to write book? The book cover is so impressive. It attracts us to read the whole book.