"Flight Of The Sparrow" by Amy Belding Brown 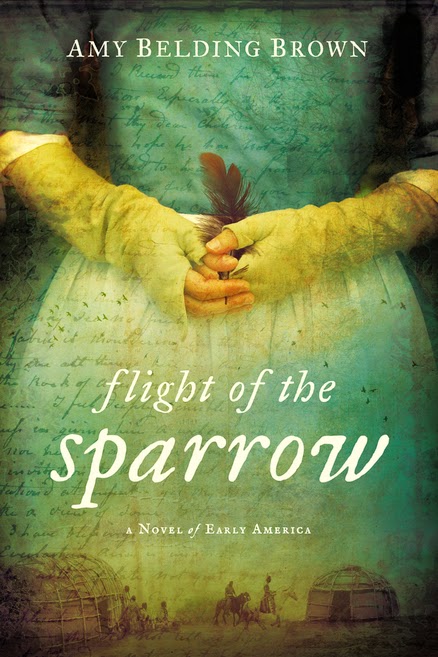 I was offered the opportunity to review this book by a wonderful publisher's representative. She had not been sure that I would like "Flight Of The Sparrow" since she had read (and how cool is that she actually looked and read!) my preferences, and had noticed that I tend to 'specialize' in European historical fiction from the 10th through 19th centuries. I am SO glad that she contacted me since is a true gem of a book! I would have been unfortunate had I missed this chance to read it!

"Flight of the Sparrow" recounts the story of Mary Rowlandson, nee White. Mary was was born in Somersetshire, England. Her family left England around 1650 and settled in Salem in the Massachusetts Bay Colony. After another move to the frontier village of Lancaster, she met and married the puritan Reverand Joseph Rowlandson in 1656. During the time of King Philips war (sometimes called the first Indian War) there had been a dramatic increase in hostilities. On February 10, 1675 the town of Lancaster came under attack by several tribes. The loss of life was large, the settlement was burned and many women and children were taken as hostages. Mary Rowlandson was one of those women. She and her daughter Srah were both seriously wounded during the raid. Despite Mary's attempts to heal her daughter along the way, Sarah died from her injuries some days later. Mary survived her wounds and became the slave of one of the ruling women in the tribe. In May 1676 Anne was ransomed back to English for the tidy sum of 20 pounds.

Once I picked this book I could not stop reading it.

"Flight Of The Sparrow" begins with Mary's life slightly before her capture. It then recounts her captivity, her 'redemption' and her life after her captivity. Amy Belding Brown narrates Mary's struggles; both to survive and prosper during her captivity, as well as the pain and frustrations that she contends with after her return to English life.

Mary discovers that she experienced more freedom as a captive than she had even been able to achieve as a 'good wife' in her own, Puritan English, community. She appreciated the relative freedoms that women were allowed within the Indian communities. Mary was even allowed to become a bit of an entrepreneur; sewing clothes in exchange for food, shelter and other small comforts that made her captivity more easily managed. She also meets a "Praying Indian named James Printer. James becomes Mary's protector within the Indian community and, over time, Mary develops a deep, but forbidden, respect and love for this intriguing man.

When Mary is 'redeemed'  by the English her husband does not come to meet her. He had raised the money for her redemption but shows no happiness when Mary returns to the family home. He treats her as if she is 'tainted'. Mary's confusion leads her to feel as though she has no place in English society any longer nor is she able to return to the Indians whose way of life is fast fading. Mary feels adrift, alone and lonely.

After I read the book I did a bit of research to see how well the story followed the actual events. I have to say that I have seldom read too many other historical fiction books that follow the reality as faithfully as this book does!

This is a riveting read, with seamlessly intertwined plotlines and characters that are beautifully portrayed and exceptionally well developed. The realities of everyday life in the colonial period are exceptionally well portrayed. The  grinding routines; the daily tasks of hearth and home, garden and house keeping. You can 'feel' the pain of loss through starvation and ill health; you can relate to the constraints that were put upon the people by their strict faith, and the physical constraints that the women of the community, especially, experienced. They endured the actual constraints of their clothing as well as  the societal constraints of being a good, puritan wife and, upstanding member of the community. The community left no room for any personality variations. It must have been a suffocating existence for many.

Amy Belding Brown knows this history and portrays it will all of its good and bad points. She does not flinch from the realities of the time

I was so pleased with this book that I ordered Ms. Belding Brown's first book, Mr. Emerson's Wife
Posted by mzjohansen at 9.8.14

Hey are you planning on advertisement added soon? If so, emphasis me as I can accordance you more.
Sarajevo apartment

Such a historical novel. This is a well written, nicely precise, fictionalized account of a real person. Writer gathered all historical things in one frame. Just click to read more about paraphrasing and other literary terms.

I was often confused in paraphrasing? I found this online service https://www.paraphraseservice.org/a-guide-on-how-to-reword-my-sentence/ for paraphrasing. Here I learn how to reword our sentence

A good writing book always help us increase our knowledge on any topics. This actually very good book review you have provided. Thanks to the book author to published this wonderful book. Every book reader should read this book to improve there knowledge. Please check our essay revision services here https://www.essayrevisor.com/essay-expander-special-offer. Thanks for sharing excellent book review.

A good story book writing is always challenge for a writer. The author write a good story book and here you have shared wonderful review about the book. Also Canadian writers can take sentence paraphrase help from https://www.paraphrasegenerator.org/paraphrase-this-in-canada. Reader should choose this book to read. Thanks