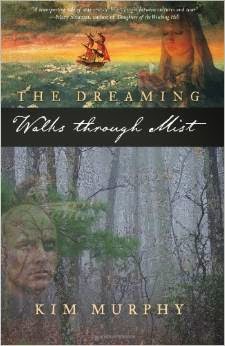 FROM THE AMAZON PAGE
"...Witch trials in Virginia? Salem wasn't the first...Psychologist Shae Howard treats a patient who claims to recall nothing of the current century. Under hypnosis, Phoebe Wynne tells an astonishing tale of an ocean crossing to Colonial Jamestown, followed by near starvation and a daring escape to a nearby Indian tribe.Although Shae's ex-husband, seasoned police detective Lee Crowley, is intrigued by Phoebe's story, he remains skeptical regarding her claim that she's from the seventeenth century. A Native American himself, he does, however, admit to feeling a kinship with Phoebe. How is it that she seems to understand his pain and anger at being caught between two cultures?Phoebe shows Lee "the dreaming," which reveals a misty world where the Powhatan people and Colonial Jamestown come to life... and connects him to his own past. Is Phoebe delusional? A witch? Or has she indeed traveled through time? ..."
Posted by mzjohansen at 4.7.14

This is very awesome post .Thanks for sharing such a nice blog .Visit here for more know about short world history.

I love the historical fiction because I have read those and I realize that those were the real written materials we had those days to learn form http://www.bioexamples.net/the-most-famous-political-biography-examples/ to gain some trust of the readers.

Time travel is also a fiction that has been written by a lot of writers and they got fame as well with http://www.onlinerewriter.biz/our-services/paragraph-rewriter-online/ because the readers liked all the stuff they had shown there and loved reading those books.

These books are always giving us goal to write positively in no time. Time amnagament is also important for the writers so they must click for info about how things can move positively.

Wow i read this novel four times and everytime i enjoyed it alot. Such books are recommended reading for the readers. Such books must be available online and book stores too.

Kim murphy is one of the finest author who always wrote different books and novels. This book is giving us challenge to read different. This site https://www.rephraser.net/how-to-rephrase-email-spam-words-to-avoid/ is providing all about paraphrasing perfectly.