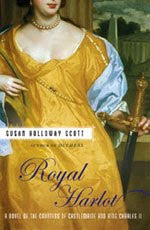 * * * *
I seem to be a serial reader. When I find an author I like - especially one that writes of a time period that I am exceedingly fond of - I seem to try to read every book written by them! This same propensity holds true for Susan Holloway Scott - whose novels never cease to please me. Her books transport me  and I am always sad when I come to the end of one of her books. That's high praise from mew and is, perhaps, why I go on the hunt for the next title right away.
Since I generally read so much about the Tudors I have thoroughly enjoyed reading about the reign of King Charles II, the "merry" king.  "Royal Harlot" follows the life of Mistress Barbara Villiers, later Lady Castlemaine, as she becomes Charles' II maitress-en-titre - better know as Charles' "head honcha" mistress. Barbara Villier's family, the second Earl and Countess of Anglesea had been staunch Royalists during the reign of Charles' father, Charles I, but after the government was overthrown ,and Charles I beheaded, the family fortunes had turned. Necessity brought the young and beautiful Barbara to an an arranged marriage to Roger Palmer, the Earl of Castlemaine. Barbara become Charles' mistress while she still married to her Palmer, but ultimately he was, it is believed, paid off in one manner or another leaving free Barbara to devote her energies to Charles alone.
The story chronicles the many flirtations and mistresses that Charles had during his relationship with Barbara. She gave the King five children that he acknowledged as well as a sixth girl who Charles adopted as his own but who most likely was a product of Barbara's own affair with the dashing military officer John Churchill (who ultimately married Sarah Jennings - the topic of the book I am currently reading be Ms. Holloway).
What I enjoyed the most about this book is that it effectively takes you the the Court of Charles II. One can so easily 'feel' the pique and jealousy of Barbara as Charles wends his way through affair after affair. One glimpses the life of Charles' wife as well - the tolerant and lonely Catherine of Braganza who, it seems, was unable to provide the King and England with an heir.
In the end, Barbara leaves the English Court and Charles. By this time Charles has taken Louise de Kerouelle, Duchess of Portsmouth, as his maitress-en-titre. Barbara moved to France in 1676 and returned to England only in 1679 to attend the marriage of heir son, Henry to Lady Isabella Bennett. Surprisingly, while she lived in France she became reconciled with her former husband, Roger Palmer and they maintained a friendly relationship hereafter. Charles died at an early age, 55, of a presumed stroke. Barbara lived to a relatively ripe old age of 68, dying of edema (dropsy) in 1704.
Susan Holloway's books about the many mistresses of Charles II are all, in my opinion, exceeding well done, highly entertaining and well worth reading. I am currently reading another of her "mistress" books, "Duchess, A Novel of Sarah Churchill" which is also a terrific read! I have already read her two other "mistress" books - "The King's Favorite : A novel of Nell Gwynn (a must read I think!) as well as "The French Mistress" (about Louise de Kerouelle). I don't think any of the  excellent titles would disappoint in any way !
Posted by mzjohansen at 8.6.10

I mentioned on your last review that I really love these books. I find the Restoration fascinating to read about, and at this point in time I am enjoying that period more than the Tudors.

When you are into the writing then you need to be more certain on things like said here http://www.punctuationcorrector.net/ and you will check how good your writings are.

The profession of writing is very important for that person who has more interest in this field. A good writer will be www.plagerismchecker.org create more grammatical and peace environments for the characters of the story. I want to write royal stories so I want to collect the royal materials.