"The Forever Queen" by Helen Hollick 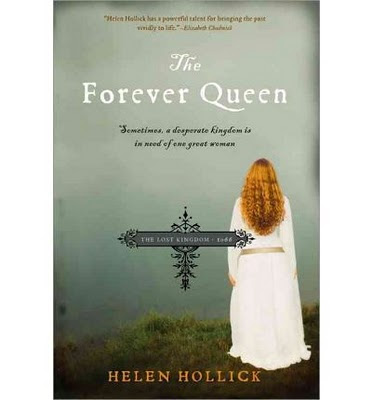 * * * * *
As most of you who have followed my reviews for any length of time know I am a real European history buff - especially British history. I have to admit, however, that I have never known much about the early history of Britain and very little about Anglo Saxon history. Therefore, I was quite happy to have been given an opportunity to read "The Forever Queen" whose time frame  is 1066. Weaving a plot with many diverse characters, warring factions in areas that no longer even exist and a very involved plot takes great skill and dexterity to to well -  the reader, after all, must be able to follow along. Helen Hollick has pulled this technical feat off with adroitness.
The story of "The Forever Queen" recounts the history of Queen Emma, who, although her story is shrouded in a place where the life of a of women, even a queen, had little value in recounting- is a story that is fascinating, compelling and thoroughly enjoyable and instructive. When people use the word instructive it gives a sense of dryness I suppose but  I use the word 'instructive' as one of living history - wonderful readability, enthralling and excellent historical story telling.
The author notes that Queen Emma's history is even harder to accurately piece together that that of the later, but better know, Queen Eleanor of Aquaintaine.  Emma was of Norman birth - a link between the factions of the Normans and the English. Emma's true name was Alfgifu, but she seems to have preferred to keep and use her given name of Emma for all but State and official documents.
Emma was married early, in 1022, to the cruel Aethelred - as a King he was, useless. corrupt and ineffective at ruling. As a man he was even more cruel - I think all in all I would consider him a misogynist. From the author's notes we read that "....Emma is the only woman to have been an anointed, crowned and reigning queen to two different Saxon Kings, yet she is barely known in history...". After the death of King Aethelred II  in 1016 Emma re-married , albeit cautiously, to the  Danish King Cnut (the Great) had been born about 994 and was crowned King in 1014. His brother, Harald become the King of the Danes at this time as well. . For a fascinating historical synopsis of King Cnut see Wikipedia.For additional details on King Cnut and Queen Emma have a look here.  The author, in her very well done Author's notes also comments that during the Victorian times King Cnut's name was anglicized to Canute to sound more realistically English.
It is said that King Cnut - who Emma came to love, admire and respect very much had a daughter by a previous mistress that he brought to England to live at Court. Queen Emma had a son  King Aetherlred, Edward, who was begotten by more of a rape than an act of love. He was known to torture small animals as a youth and was ultimately sent to the North to become King of the Danes to keep him away from Queen Emma - who he disliked  - but Cnut never wanted her to know that truth. Edward ruled the Danes with the ruthlessness by which he had become known.  A daughter was born to King Cnut by a earlier mistress whom he brought to England. It is said that Edward allowed her to be drowned in a mill race he watched - it was after this occurence that he was sent to Denmark. As a a side note - Queen Emma is the great aunt of the famous William the Conqueror.
As you may be able to guess by now I thoroughly loved this book. It provided me with so much well researched early history of Britain that I had never known about - or had chosen not to read about I suppose. Helen Hollick is, in my opinion, a master story teller who carefully researches her subjects. Most all of her book is true from a historical point of view and, where people, places , names or events have been changed she notes that in her well done Author's notes. For a period in history that has so little factual information written about it I am astounded at what an amazing book has resulted.
I think that anyone who is a fan of medieval and/or Anglo-Saxon history owes it to themselves  to read this book. Once you start - you will not want to stop. There is, of course, a tremendous amount of history in this book but it also includes information of what sorts of medicines were used by the common people - or the royal ones too for that matter. There is also a entirely strong vision of what the feudal system was like at the time as well as how the continuous wars and political instability of the region had such a deleterious effect on this part of history. This book paints a vivid portrait of the time as well as of a Queen who has had such a lasting effect on the history of England. It's truly an amazing book that I am very grateful to have read!
Go get your copy! I can't imagine that you would regret it!
disclosure note: This book was provided to me by the publisher for the sole purpose of review. No other remuneration was received.
Posted by mzjohansen at 5.11.10

thank you for such a fabulous review - I am delighted that you enjoyed the read.
Emma was a fascinatibng character of history - I am so pleased to be able to bring her out from near obscurity, even if only in the form of an historical novel

thank you for such a fabulous review - I'm delighted that you enjoyed the read. Emma was a fascinating character, I'm so glad I have been able to bring her alive again through the pages of historical fiction

Many thanks regarding this kind of wonderful evaluate. I will be happy which you appreciated the particular examine. Emma has been any fascinating persona regarding historical past : I will be thus happy in order to deliver the girl out of around obscurity, even when simply http://www.copyrightchecker.net/ by means of a great traditional story.

I'm sure which means proud as a way to draw their out of in the proximity of obscurity, even in the event basically like a particular www.correctthesentence.com amazing unique.

Very good Article! Thanks a lot much pertaining to expressing this specific very article, it turned out so competent you just read along with necessary to boost our know-how while current one particular, preserve writing a blog http://www.manuscriptwriting.net/.

Clearly, the planning of an understudy for coming life ought to be made with no other individual's data and aides can help him in this https://www.paraphraseservice.com organizing. Everybody's kin don't have much riches that is the reason, poor understudies make the arranging of getting a decent and mind boggling occupation.

School library is the best spot for those understudies who wanna read books delicately and in partition. They can utilize any kind https://www.paraphrasingservice.org of book in library to look at and can get data about any subject like history and science.