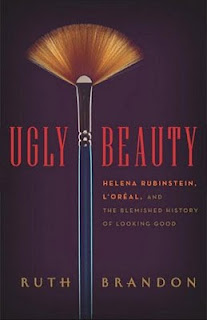 * * * *
This wasn't a book that I had anticipated reviewing here. It doesn't fit my "usual" categories - as quirky as they can sometimes be. I was offered this book to review and became intrigued by it enough that I decided to post my review.


The name Helena Rubenstein struck a chord with me - seems like I remember my grandmother using some of her cosmetics or something. I knew that she had been "the" woman in the beauty industry at one time. Since I have always been intrigued by the world of fashion and cosmetics - despite the fact that I am neither fashionable nor a heavy user of 'product' - I thought this book would be interesting - and it is!

The book is a dual biography of two of the early cosmetic industry's biggest names. Helena Rubenstein whose impoverished roots in Poland drove her to create one of the the largest cosmetics firms in the world. Her life as "Madame" was lived large around the world.'Madame' believed in working women and it was the money that working women made and spent on her cosmetics that made Helena Rubenstein the first female millionaire.

Her nemesis, Eugene Schueller was French and came from an extremely hard-working family of bakers who slaved from dawn to dusk to make the money that allowed for Eugene to attend the best of schools. Eugene was trained as a chemist and was paid 50 francs by a  noted hairdresser of the day to  find " a safe and reliable artificial hair dye" .. the rest, as they say, is history. Eugene became the founder of L'Oreal which ultimately took over the Helena Rubenstein company. Eugene's beliefs countered those of 'Madame' as he believed that women should be in the home - he used the 'beauty business' "as a source of cash to buy economic and political influence".

This is a book, however, not only about these two driven individuals but also about history. Through two World Wars these two complex people made their ways through the sometimes murky business of beauty, fashion and politics. The author, Ruth Brandon, has done an excellent job of presenting the lives of these two protagonists in relation to the historical events that were ripping countries and belief systems apart. It's a fascinating read that flows easily like a novel.
When I first picked the book up I had not intended to read it right then - I thought I would finish another book first. I became riveted to the story though. It's a fascinating view into the world of 20th century politics and into the lives of two mega humans - equally driven but for differing reasons.
An interesting tid-bit from the book is about the name. Eugene originally named his line of hair dyes L"aureole after a hair style that was popular in 1905. Soon afterwards he changed the name to what we now call L'Oreal.
Posted by mzjohansen at 4.4.11

Craft your personal statement, so that it is unique and memorable. Start with an attention-grabbing opener in your introduction such as a personal anecdote that explains why you decided on that particular college or university.

The presentation is not be concentrated, logical, thoughtful without making it defensive. I am really loved to get these service and looking for these service from many days. Its really a great platform to get defense presentation for thesis paper. http://www.academicghostwriters.net/ get more info here about it to get better view.

As I have low GPA, I am very much feared to get enroll in college. The list of 10 colleges may be great assistance for me if I submit all the documents properly. I am very much pleased to about its recommendation and assistance. useful link to get the essential academic writing help for you.

Finally, My essay got selected by the department. If I don't get these tips maybe it will not be possible to be selected. This step by stem guidelines technique helps me a lot to write a wonderful essay based on a history topic. https://www.researchpaperediting.net/ if you need more hints then you can visit here.

You satisfied me to distribute an astounding article on the point of debilitate individuals' tutoring as they are https://www.onlineproofreadingservices.net/our-cheap-proofreading-services/ piece of our locale. They can satisfy themselves on the off chance that we give them opportunities to get training from schools like different children.