"She Wolves: The Queens Who Ruled England Before Elizabeth" by Helen Castor 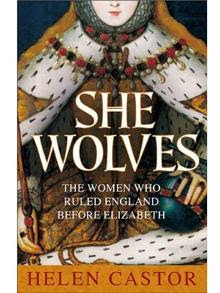 * * * * *
I had eagerly awaited the release of this book and waited until I could take my time and read it slowly- taking notes if I wished. I wasn't disappointed!  The book begins with a genealogy of the Tudor Succession and as Edward VI is dying. The book is an utterly fascinating, eminently readable, treatise about the tradition of female rulers prior to the time of Elizabeth I.
Included are:
Matilda: Lady of England 1102-1167
Eleanor: An Incomparable Woman  1124-1204 (long lived indeed!)
Isabella: Iron Lady  1295-1358
Margaret: A Great and Strong Laboured Woman   1430-1482
and, as the books returns to the time of the Tudors and the death of Edward VI, in "New Beginnings"
Mary and her disastrous marriage with Philip of Spain. The book ends as Elizabeth I is handed the reins of of government and becomes both the King and Queen of her kingdom.
Each section is preceded by a both a genealogy as well as a map of the Kingdom as it existed at that point in history. Very helpful while you are reading about the constantly changing boundaries of the various countries. The genealogies really made me realize how small the pool of available spouses for royal marriages really was at the time. Papal dispensations for consanguinity matters must have been a steady source of revenue for the Church! Ms. Castor has an uncanny ability to write non-fiction that reads as enjoyably as fiction. I was sorry when the book ended - wanting more of this truly riveting history. The struggle of female rulers really was the the beginning of the fight for women's rights and the fact that these amazing, talented, strong women managed to rule as they did is a wonder. I wonder how many modern women would have the tenacity and determination to breach the boundaries of proper 'etiquette' as these female rulers did. It boggles my mind at how strong and focused they must have been. No doubt they would be the sort of successful women who would, to this day, be called She Wolves, baracuddas, or another word that begins with the letter b----.
I wished that the book had more illustrations - but then I always wish that. I always want more images to pair with the words in a book. The included 8 pages of color images are well done - but more would have been better (of course!) This book will, I think, hold wide appeal to history buffs - especially those who are Anglophiles as I am, as well as for people who study women's rights and societal issues.
I will be on the pre-order list as soon as I hear about Helen Castor's next book !
Posted by mzjohansen at 30.5.11

The presentation is not be concentrated, logical, thoughtful without making it defensive. I am really loved to get these service and looking for these service from many days. Its really a great platform to get defense presentation for thesis paper. www.duplicatechecker.net/ get more info here about it to get better view.

In my last reaction paper I obtained the highest marks because of these qualities of writing. I wish to take this service again because it's really pleased me that I am looking for. This look at more info may be also effective for you.

If personal statement length is longer that doesn't meet the quality it will not fruitful. Sometimes selectors said to use limited words. The free tool of this service is really appreciable. It is so fast and reliable. www.grammarcorrector.org/ here is the link for further details to get help.

Hard cover is ensured for the good roles of the persons. The change of the reflection and visits of the http://www.writingabio.com/business-bio-writing-service/ are invited for the people. The suggestion of the hard cover is invited for the approval of the slots for the humans.

A good book can help us to increase our knowledge and reader always love to read informative and historical books. Here author shared wonderful book information. Please visit our site to choose best rewriting services. Every reader should read this book to increase knowledge and mind satisfaction. Thanks