"Elizabeth I" by Margaret George 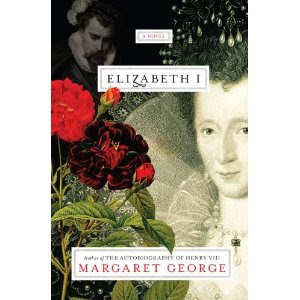 * * * * *
One might think that reading through 688 pages is daunting but I tend to prefer longer novels - they allow me to really  reside in the book and get to know the characters. One of my favorite female heroines is Elizabeth the First and one of my favorite historical novelists is Margaret George so I figured this would be a perfect combination - and I right!
The novel is co-narrated by Elizabeth herself and begins in 1588 as she enters late middle age . Co-narrator is her cousin, Lettice Knollys - the woman who had the audacity to actually marry the queen's main squeeze - Robert Dudley, The Earl of Leicester. Covering the last 25 years of Elizabeth's illustrious reign this book puts a very human face on the great Queen - complete with her need to keep notes to jog her memory, hot flashes that are troublesome, the sadness of the loss of more and more long time friends and trusted advisers.
The characters are rounded out, well developed and made very human - among the stand-outs are William Shakespeare, Francis Drake, Francis Bacon, Walter Raleigh, William and Robert Cecil and the indomitable Earl of Essex - Robert Deveraux, the step-son of Robert Dudley and the son of Lettice Knollys- who Elizabeth had taken under her wing and upon whom she had lavished many rewards and titles.
The book follows  Elizabeth  commitment - she is wedded to her country and it's people rather to any man of her choosing - and Lettice who lives a passion filled life of loves and losses. Lettice was banished from the Court upon her marriage to Robert Dudley and the book follows the querulous nature of their relationship and the gradual thawing of the Queen's displeasure as the pair meet on common ground - the garden of Hever castle - former home of their forbears - Anne and Mary Boleyn.
Also featured in the book is Elizabeth's life long friend and confident Catherine Knollys, wife of Sir Francis Knollys and daughter of Mary Boleyn (Lettice Knollys was Mary's grand daughter). Catherine, in the book, is considered the family peace maker. We feel the threat of the Spanish Armada and the Irish threat of the great O'Neill, Lord of Tyrone. All of the political fears and skirmishes of the time are brought to light  almost like having a ear on history - like being a fly on the walls of Whitehall and Richmond Palaces. Riveting stuff!
This book is meticulously well researched and it paints a vivid image of what it must have been to be Elizabeth, The Virgin Queen. Historical details bring the period to life and the characters are almost 'touchable'.  I loved this book and will, I think, choose to also listen the audible version. I found that Hilary Mantel's "Wolf Hall" really came thoroughly to life when I listened it...and think listening to this book might really highlight my delight with the book even more.
If anything - I would have liked this novel to go on longer. I savored the last pages of this book and was saddened when I finished the last page.  It's a book I will, no doubt, re-read.
Posted by mzjohansen at 2.5.11

Last year I have submitted a letter of intent for high school grad ship but don't know why they do not accept my proposal. I was very frustrated. Now it thinks to me great appraisal floor. http://www.essaycorrector.com/essay-revisor-helps-make-your-text-perfect/ mouse hover this site to get more information.

Its just the one place to get everything. It assumes to be appreciable thesis defence that helps to get good marks. I would like to get this service. One thing is very catchy for me that they will see my gesture and posture makes me more astonished. follow the link to get effective info about it.

Finally, My essay got selected by the department. If I don't get this tips maybe it will not be possible to be selected. This step by stem guidelines techinique helps me a lot to write a wonderful essay based on a history topic.http://www.paraphrasegenerator.biz/ if you need more hints then you can visit here.

Pretty interested blog. The collection of this writer is amazing and i can really have more ideas about this work. Here i can have this site https://www.bestghostwriters.net/data-collection-and-analysis-sample/ and it is perfect.

Awesome stuff available so click over here and see what kinda services you are looking for.