"The Wild Rose" by Jennifer Donnelly 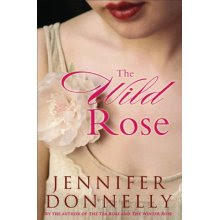 * * * * *
This is a book worth waiting a little for. I've been a fan of Jennifer Donnelly's book for some time and was pleased to be given an opportunity to read "The Wild Rose" early. The plot begins as the 19th century was drawing to a close and the chaos of World War I was just beginning. It's a love story as well as a cautionary history lesson. Thanks to historical fiction I have become interested in this period of history - which in the past had never held much interest for me. It truly was a Golden Age before the war split Europe apart and wreaked so much havoc in the lives of so many millions of people. So may lives were lost, so many dreams shattered.
"The Wild Rose" is a very well written book that is replete with intricate sub-plots and complex, well crafted, characters whose relationships cross and re-cross each other....all seamlessly presented and extremely readable.
The book follows the lives of a group of relatively upper crust Londoner's and the places that are highlighted in the book are Britain, France and the sands of Arabia. Some famous people are portrayed including Willa Alden who is based on the famous heroine, "Desert Queen", Gertrude Bell. Spotlighted is Willa's relationship with Lawrence of Arabia and her love of Seamus Finnegan. Willa is portrayed as a strong minded, self directed and thoroughly un-Victorian female while Seamus Finnegan (Seamie) is part of a well know British family who shares a love for mountainous adventures. Their love that was passionate, complicated, and star crossed. It would take pages to simply describe the complicated relationship that they shared.

Although there are many pages in this book I found that it read quickly. I was fascinated by Ms. Donnely's careful research that allowed her portrayal of historically correct glimpses of the fashions, mind set, morals, entertainments, foods and adventures of the time. This book is rife with well fleshed characters, intertwined relationships, excellent adventures and a solid taste for the historical importance of this amazing period of history - the sunset of the Golden Age and the beginning of the world's introduction to the real horrors of modern warfare.

note: this book was provided to me by the publisher for the purpose of any honest review. No other remuneration was received.
Posted by mzjohansen at 23.6.11

A personal ethics statement should reflect your personal values and morals. It should explain the values that are important to you and should act as a road map for how you conduct your life. See more marketing personal statement

The IELTS course can allow you to skills you'll apply on english. Also, assist you to find out within the higher approach. Go to this web site http://www.textextender.com/about-our-text-extension-help-company/ and it's a correct place to relish your writing time.

Sounds like a good setting and good plot. Thanks a lots for such quite sensible writing and posting. I think this guide of http://www.howtoparaphrase.com/how-to-choose-the-best-paraphrase-service/ can assist you on the coed transcript for the faculty time as somehow it's powerful to somebody.

That seems like a beautiful trip! the most issue I've solved after I visit alternate elements of your writing. homepage and therefore the older guy had a lot of probability to try and do that job utterly however at the primary moment, you wish to urge an opportunity that may be a very helpful link.

I have seen my friends to write personal statement for Podiatry school. I will definitely let him know about this service and may be it will be great help for him and get his desire objectives. www.copychecker.net here is the also great source for you.

The Jennifer donnelly is waiting for your better section. You can go with the musing crow designs and can find the new link. Just go with the better attention of http://www.bestparaphrasingsoftware.com/7-tools-to-reinvent-your-paraphrasing/ and find your life more good.