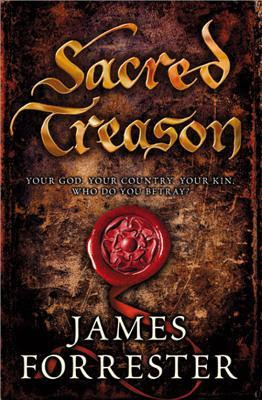 Dr. Mortimer, writing as James Forrester, has now taken his unique and admirable writing talents to the realm of historical fiction. His  Clarenceux Trilogy begins with Sacred Treason which has, gratefully, now been published by SourceBooks, a publisher that I have come to rely on for excellence in historical fiction publications.

Set in 1563, as Elizabeth's reigns over a Protestant England, political intrigue, religious strife and citizen unrest remain hallmarks of the kingdom's daily life. The main protagonist, a 'secret' Catholic by the name of William Harley, holds the eminent position of Clarenceux King (senior officer at arms). It is in the stormy hours of a late night that a Catholic friend, Henry Machyn, knocks on Harley's door to press a manuscript into his hands, begging for him to guard the book and saying that he (Machyn) will soon be dead. Intrigued by what he has been  charged with guarding, William Harley, begins to investigate the contents of this obviously important book; finding within it's pages clues that involve religion and the security of the crown.

Alerted by the importance of this manuscript well known figures such as spymasters Sir William Cecil and Sir Francis Walsingham hunt down the Clarenceux (William Harley) whose life is quickly upended as his house is sacked, a servant murdered and his family forced to go into hiding. With no idea what the real importance of the book is Harley and Henry Machyn's widow, must race to unearth the clues that hide within the books pages before he loses his reputation and, quite possibly, both of their lives.

The hunt for the clues leads these two hunted people through the back alleys of London and into the parlors of some very interesting people- each of whom holds a piece the book's puzzle in their collective knowledge.

As you might expect from one of Britain's premier historians, this book is a thriller that is impeccably fast paced, highlights superbly written plot lines and well developed characters that combine with Forrester's unique grasp on the historical facts to produce a novel that is gripping throughout and has the added benefit of an ending that is worthy of the book!

The novel began just a tad slow - but it was just a few pages before I could not put the book down! It's a fast paced page turner that can't help but grab you and pull you in! While I don't necessarily read historical fiction to actually learn history, given the author's knowledge and abilities, this book does have the added benefit of his expert knowledge of the period which lends itself to the historically correct 'feel' of the book. It's a romp through time that you will not regret taking!

Don't miss out on reading this book! I'm now eager to read book two which I hope Sourcebooks will also release before too long!

Writing a graduate school personal statement can be a daunting and difficult task. You are selling yourself and trying to let the admissions representatives know WHY you should be chosen over other qualified applicants. See more letter of recommendation llm

Creating any Masters university private assertion can be quite a difficult and also trial. You might be marketing oneself and also wanting to allow the admissions associates realize For you to become picked above some other certified people.You can visit more http://www.essayrewriter.net/faq-on-how-to-rewrite-my-essay/.

With the assistance of that online digital selling signals you can discover the fresh new method for that achieving success. You should also login considering the unique blog about this blog. Really grab the click here in start looking these in such a community and revel in the ideal improvement choices.

Along with the help of which on the internet electronic promoting indicators you can find the revolutionary way of which success. It's also wise to sign in thinking about the distinctive weblog relating to this weblog. Truly get the actual click the http://www.rewritemyessay.net/how-we-provide-essay-rewriting-help/ within begin looking these types of in this neighborhood and luxuriate in the perfect enhancement options.

Your musical stuff and skills took me to this link otherwise I was too much stuck www.correctthesentence.com in my one of the essay writing assignment work.Nice post.

This is really very interesting www.passivevoicechecker.com/ thing for the atheletic minds i am sure this will increase the sales of the the company to a great extent