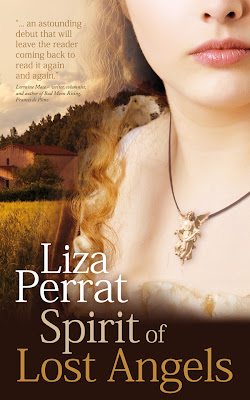 This debut novel from author Liza Perrat marks the beginning of what I think wil be a glowing career as a writer. I honestly feel that the quality of the writing will put the author up in the ranks of historical fiction nobility. Yes, that's how good I think this book is! I was so sad when it ended. I need more!

Victoire is the book's main character and life presents trials and tribulations for her family - the Charpentiers. Their homestead is destroyed by fire. Mother is the villages midwife and herbalist. Father is a carpenter whose work becomes more difficult to find and who travels  to find work. While he is away working he is crushed by the wheel's of a noblemen's carriage and barely makes it home before he dies of his injuries. Losing her father inculcates a hatred for the nobility on the mind of young Victoire. As a way to rise above their poverty Victoire's mother teaches her how to read and write - hoping that knowledge will be her salvation and her escape from their small, impoverished, village way of life.

Victoire's mother deeply mourns the loss of her husband and vows publicly that "God does not exist" and that she will never enter a church after the funeral for her husband. It is at this time that Victoire begins her education in the ways and uses of herbal medicine and midwifery. The villagers, however, believe that a woman who refuses to enter a church is surely in league with the devil and that her use of herbal medicine is the work of the dark one. As a result Victorie's mother is drowned on the village's riverbank - the banks of the Vionne river. Before she is murdered she manages to pass her pendant of an angel to Victoire - and leaves her daughter to unlock the meaning of the pendant and the significance of the angel.

As an orphan, the care of Victoire falls to the village priest who finds employment for her in Paris as a maid in the house of a noble family. In short order the Baron, the master of the house, takes Victoire as his mistress and - as things happen- Victoire finds herself pregnant by her despised employer. Her daughter, Rubie, is birthed with the help of the cook of the household, Claudine. Feeling that she has no other option, Victoire leaves Rubie on the steps of a church to become a foundling rather than to have them both thrown out of the house by the Baron. Victoire leaves the angel pendant and a letter with her daughter in the hopes that it will be kept for the little girl - so that Rubie will know that her mother did love her but felt she had no choice but to leave her in the hopes of providing her with a better life that she could offer her by herself.
Upon the death of his wife, a fellow villager, Armond, marries Victoire to help care for his children, one of which is Victoire's childhood flame, Leon. Their early relationship becomes a secret as together Victoire and Armond build a prospering business as inn keepers. They have children, a beautiful set of twins. The fates again cast their hands and within several years Armond is dead and Victorie lapses into a severe depression, just as her mother had when her husband died.  Her twins drown in the Vionne River as Victoire dozes near the river bank - they is nothing that she can do to save them and she has no memory of the event.Her severe depression causes the village to believe that Victoire is possessed and she is sent to the infamous Salpetriere asylum in Paris. This a place from which few people who walk in ever walk out. A place of unspeakable filth and depravation. Since she is considered a child murderer her life is especially bad inside the walls of this awful place. It is here, however, that she is befriended but a wealthy patron. They both craft an escape and Victoire finds herself, implausibly, financially well off thanks to the woman's generosity.

As Victorie rebuilds her life she discovers the meaning of the "lost angels", has a surprising reconciliation, finds her Rubie and some modicum of ease.  This is a story of strife, loss, neglect, pain, sorrow, suffering and remorse, but it is more than that. It is also a story of love, triomphe, healing and recovery. It's a story of redemption and second chances and it is about the good that can occur even in the bleakest of lives.

I can't help but think that this will be the first in a long line of huge success' for Liza Perrat. She weaves this tale with consumate skill and finesse and her characters are all very well developed and they are believable people. It's a book that will leave wishing it had been so much longer! From the first page to the last it rivets your attention.

I can't recommend this book more highly! If the review seems filled with hyperbole it's because I truly was amazed at what an outstanding read this was. You won't regret reading this book - it's mich more that it's modest price!

Partial disclaimer:
I was offered a free copy of this book for review by the author but I opted to pay for it myself instead. It's a modest price for such an incredible read.

Hello there! I could have sworn I've been to this website before but after checking through some of the post I realized it's new to me.
Anyhow, I'm definitely delighted I found it and I'll be book-marking
and checking back frequently!

I possibly could possess sworn I have been for this web site prior to however check this looking at via a few of the publish We recognized it is a new comer to me personally. Anyway, I am certainly thrilled I discovered this as well as I'm going to be book-marking as well as looking at back again often!

You may also save the particular brand-new band of close friends you might have ever had under just best ideas here. You will find the present day website inside the heroes using this type of spot and also identify far better portion. Simply get the brand-new targeted you might have ever had under and also identify this kind of fantastic web site inside better threshold.

You can get present websites while in the characters using this recognize along with detect significantly better fraction. Plainly grab the brand-new particular you've probably ever endured with along with detect https://www.rewordinggenerator.com/how-to-reword-a-sentence/ this specific fabulous website online within just more desirable patience.

In this post you tried to share really great artistic http://www.copyrightchecker.net/ ideas which I would like to add in my essay writing dissertation assignment.Thank you so much.

Your post solved many hidden problems of my life.This is well written article and I would http://www.manuscriptwriting.net/ like to do professional level essay writing stuff for your page.Thanks a lot.