"The Confessions of Marie Antoinette" by Juliet Grey 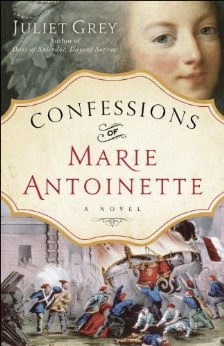 I was thrilled to have been provided with an Advance Reader copy of this book to read and review!

Not too many books are powerful enough to bring a tear to my eye, but this book certainly did do just that!

I have always been dumbstruck at the savage brutality of the French Revolution. In my eyes it seems to have been bloodier, more disorganized and more devastating than America's own Revolution. I've read many non-fiction histories about the French Revolution and biographies of Marie Antoinette. I believe that it can be difficult to portray a historically tragic figure well, without overdoing either empathy or villainy, but Juliet Grey breathes life into this book. The characters grab you into their lives and keep you riveted to the pages. I began by reading this book in the morning as I had coffee and quickly began to just sit and read, and read through to the end in a day and a half (I had to do some regular life things inbetween the pages!).

The characters are brilliantly portrayed. The French Revolution and the devastation that it brought, not only to the nobility, but to the revolutionaries themselves, are portrayed so well that you feel as though you are a part of it all. It is as if you are a part of the destruction of so many priceless artifacts, you are standing by the scaffold as men and women are swiftly dispatched by the new nation's "razor" (the infamous guillotine) . The perils and fear that the royal family endured is palpable in the pages of this book, it no wonder that Marie Antoinette's hair turned white almost overnight. It is impossible to comprehend the terror that existed during these riotous times.

Juliet Grey paints her word images artfully, and I was pleased to find so much historically correct information. I suppose that it was the historical veracity that caused this book bring a tear to my eye now and then, knowing that the reality of those dire times was so close to the story the book presents. I have no doubt that Marie Antoinette arrived in France as a royal ingenue. I have no doubt that she did spend far too many gold Louis' on her wardrobe and her homes. That was, however, the life to which she had been born, the fetes and baubles were de rigueur for the time period, and she was so very young. I doubt that any one could have imagined the maelstrom that was about to descend upon France and the Royal Family. Marie's perceived extravagance became an easy scapegoat for the masses who were starving and had no right to expect anything better for their lives. Ms. Grey's portrait of Marie Antoinette is wonderfully complex. The Queen; both defiant and powerful and the mother and wife whose purpose was to protect and stand by her family. In this book she is portrayed as coming to love her royal husband late in their relationship, as the struggles of the French Revolution played out on the international stage. Loius comes across with passivity, and bewilderment but also as a King who finally understood the issues of his troubled Kingdom. He is noble and true to his honor and his word.

This book made me consider the two Revolutions - France's and America's - governments were overthrown for similar reasons, but one just seemed so much more blood thirsty, and so much more erratic. Liberté, égalité, and fraternité were altruistic and ambitious aims, but in France it seems that even the revolutionaries experienced a revolution within their own ranks as the power changed hands so often. With each change in the power struggle the fates of Marie Antoinette and her family hung in the balance. Mercy and exile seemed like an option for some time, until, in the end, all was lost.

At the end of the book there is an excellent section that provides short biographies of the characters as well as some facts about the times. An excellent bibliography is included as are 'questions for discussion' perhaps for a book club setting. i think that these were excellent additions.

In my opinion, this is a worthy rendering of the French Revolution and the family that was at the center of rebellion and hate. This book should have a wide appeal. Obviously, for those of us who love historical fiction, but it will also appeal to readers of very well written general fiction and also for those who are history buffs as well. There are also parts of this book that are history lessons, rendered in excellent, compelling prose.
Posted by mzjohansen at 7.8.13

Only a story full of emotions and powerful words can bring such tears in the eyes of the readers and this helps them to understand what is more click for source negotiable and understood for them.

Only those books have such power to break down the readers whoose writers write that with such emotion and passion and dignity in them so others will love and http://www.originalitycheck.net/how-thesis-originality-check-can-improve-your-paper/ will publish that online at any cost to provide the best contents to the readers.

That is a very historic book and I have read it several times to understand the real myth and I would recommend all of you to try here the book that has been written by the authors to make you equip in article writing.

Marie Antoinette was on of the first female radical writers of her own times. Visit bestcapstoneprojects.com for more info. I am very happy to read some exact historical information about her.

Reading historical romance is my favorite hobby to do.Clearly, use this link a man can censure the identity of somebody and the general open who extended well direction can settle on a choice to a marvelous degree effectively the entire state of somebody.