The WInter Mantle by Elizabeth Chadwick 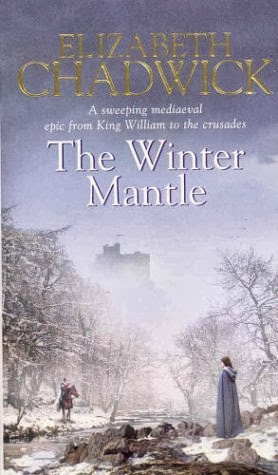 I'm not sure what it is about Elizabeth Chadwick's work, but it never fails to mesmerize me, and transport me back in time. When I purchased this book I was not aware that it was one that I had obviously had missed somewhere along the path of reading Ms. Chadwick's work. It was originally published in 2002. I can't imagine that I would have forgotten reading it when it was new!

This book follows the path of William of Normandy and begins with the year 1067 following the great Battle of Hastings. William the Conqueror is establishing his rule over Britain, and in doing so retains custody of many captured nobles, Earl Waltheof Siwardsson of Huntingdon being one of them. Although he did not fight in the war, Earl Waltheof retains his title but fights to regain his pride of place and his lands from William. Waltheof falls in love with one of  Willaim's daughters, Judith.

Reluctantly, after the threat of an uprising against him, William restores Waltheof's lands and grants him marriage to his daughter,Judith. In the years that follow, Judith  feels that Waltheof is engaged in some activities that are contrary to his fealty to William, and, through familial treachery, Waltheof is executed. His eldest daughter falls in love with the man who is sent by William to take control of Waltheof's earldom, one by the name of Simon de Senlis, who had been a long time friend, and former squire to, Waltheof. He is also a person for Judith, Matilda's mother, holds no love.

Simon follows the Crusade, leaving Matilda behind to question his fate.  Simon;s first love had followed her husband on the Crusdae trail until he is drowns.A dire injury almost takes his life, and Simon is tended  to  by his first love, who he had taken under his wing. During his convalescence they have a one time resolution to the desire that was founded in their younger years.

After his return from the Crusade, his first love becomes a nun, and Simon returns to his lands and his family. Simon and Matilda long for peace, a commodity that is difficult to come by during this turbulent time. Tension builds in their marriage, but the truth of Simon's "one-night-stand" comes out due to the birth of his bastard child; a child that Matilda must accept and raise in their home after she meets with, and grudgingly accepts, the confession of Simon's early love.

The epilogues for Ms. Chadwick's books are always one of my favorite parts. There she provides the history behind her stories. Much of what she writes is structured on solid historical facts, and I find it utterly fascinating the she "fills in the blanks" so convincingly. Elizabeth Chadwick is one of my favorite historical fiction writers and this book is a credit to her!

GORGEOUS BLOG...love your design and your blog name.

THANKS for the nice review. I love historical fiction.

Oh I never got to read such amazing post and I would now recommend my https://www.paraphraseservices.com/our-professional-paraphrase-services/paraphrase-a-paragraph-services/ fellows as well to visit this post.Thank you so much for sharing this.

It’s a brilliant effort and I got to read your services little introduction through an visit website forum.It actually surprised me.Thanks for the post.Good job.

There are many breeds of birds which are quite intelligent and are used for different purposes.I read all these facts through get more info links.You guys can also get to know all this.Nice post.

Goodness, it's amazing to comprehend that researchers will make a flying auto in not too far-removed future. Truly, it will be a useful site gigantic accomplishment for the examiners and it will be useful for the predetermination of our specific world.

Recently, one of my friends baked this for me for the snack time and it was delish! I really enjoyed having it https://www.paraphrasegenerator.org/our-paraphrase-machine-services/rephrase-sentence-generator/. I will add this to my recipe list!