"The Queen's Governess" by Karen Harper 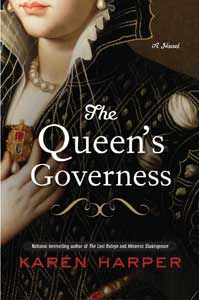 * * * * *
I had anxiously awaited the publication date for this book and was so pleased when it arrived at my door!  I love Amazon's pre-order capability - but I do still spend quite a bit of my at my local Indie bookstore - since I would not ever want to lose them!
This book is told through the voice of Elizabeth Tudor's governess, companion and friend, Kat (Katherine) Champernowne Ashley (Astley). The book recounts the story of Kat's life and spans the years 1516-1560; a tour through the reigns of Henry VIII, Edward VI, Lady Jane Grey and Mary Tudor. We follow Kat's story, beginning with Kat as a poor young girl living in the wilds of Devon with a step-mother she hates.  We follow Kat as she is first noticed for her with and intelligence by Lord Cromwell - himself and up and coming 'player' in the Tudor Court- and we follow her journey as she rises withing the ranks of the Court.
Some people may have heard about the locker ring that Elizabeth I wore until her death in 1603. It had been thought to have been simply a ring until it was removed from her hand and was found to contain portraits or Elizabthe as a toddler and her mother, Anne Boleyn. Common history has it that Elizabeth herself commissioned this ring to be made - but the book take's up another potential story for the ring. What if it had been designed for Anne Boleyn herself?
This book fleshes out the story behind Kat, a woman who was pivotal in Tudor history but about whom we know very little. Subplots of intrigue, tragedy, love and redemption are all superbly interwoven in the pages of this delightful book. Karen Harper's research was so well done that this is a thoroughly believable read that I could not put down. I had to give it 5 starts because I could not stop reading it, the history is so well researched and the characters were so real!
Karen Harper is also the author of "The First Princess of Wales", "The Last Boleyn" and, "Mistress Shakespeare" among many others. For lots more information go to her website!
Posted by mzjohansen at 1.2.10

Queen's governess is the name of the book. You can get this book from this http://www.phrasingtool.com/ site. This site is helping you to find this book and then you can easily take it for the purpose of reading.

Queen's governess is heaving such a beauty. I just saw her one time in my life and now i write a complete blog on her. Come and check this http://www.sentencecreator.com/ site where you can check more details about queen.

The governance by the harbor is amazing story and material for the learning. The purpose of the http://www.paraphrasemypaper.com/ is improved for the humans. The content of the book is done for the students in different capacities.

Queen's governance is sorted for the struggle of the individuals. The marvelous outlook of the terms and http://www.rewritemyessay.net/ is assured for the humans. The picture is identified for the movement of the marks for the people.