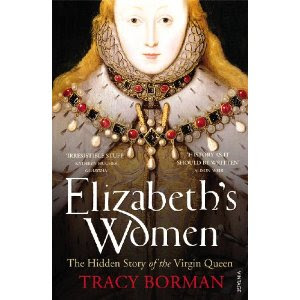 * * * * *
I loved this book! I ordered it  from Britain before it's US release because I did not want to wait (check out the Book Depository  or Amazon UK when you simply can't wait for a US release of a book ). This cover is the British edition cover. I liked it better so I used it here - you can see the US cover on the Amazon link I've posted at the bottom of this post. I think this is just about my favorite book about Elizabeth I. It's jam packed with small details and information about Elizabeth that are most often overlooked by many authors who seem to concentrate on her relationships with men and her political acumen.
This book is about Elizabeth I - the queen who has always captured my imagination and has held my interest. I wish I could time travel so that I could hear her voice - see her walk. No - not yet possible!
I think that Elizabeth was so much more than we can ever know. I think she was, most likely rather officious and rude to many of her ladies and maids in waiting - but charming and gregarious when handsome men were involved! That being said said Elizabeth was an amazing female ruler in a time when it was anathema for a country to have such a strong, apt, female leader! This book is about the women in Elizabeth's close circle of trusted female confidants. It's an aspect of Elizabeth's life - a large aspect of her life, that is often overlooked in favor of the larger issues of Elizabeth's life. The book is broken into sections that cover, her mother, Anne Boleyn, her sister, Mary, her step-mothers, Jane, Catherine and Katherine, her governesses, ladies in waiting, cousins, men and the travails of being a female ruler in a country that believed no female could effective rule by herself. Although this edition was 392 pages of relatively small print it flashed by like a novel - I could not put it down!
Ms. Borman's style is easy to read but she in no way "dumbs down" the information. I am off to order her first book now  - if I can find one that I can afford that is! " Henrietta Howard: King's Mistress. Queen's Servant". If you love history I think you too will love this book! No disappointment here !
Posted by mzjohansen at 6.9.10

I've been hearing good things about this one - I hope to get a copy at some point.

I also like to read books about Elizabeth 1 so I'll be looking it up in the library!

Elizabeth was the queen of England, sometimes also called Good Queen Bees.she was born at Greenwich palaces. Her mother name was Anne Boleyn, she was also a queen of England from 1533 to 1536. The book of Elizabeth's Women is most impressive for the common people who know the living style of the Queen,s family and their happy movements of life as well as the hardship of their life. The writing style of the poet is very good and described the grieves and hidden secret of her life. You can also check this link for getting more information about the http://www.apostrophechecker.com/your-english-apostrophe-checker-online/.Mostly in this book the grieves and tough time of Elizabeth's life discuss in a good way.

The website provides a different story about different personality but I read the story of Elizabeth is very attractive for the common man who want to know about the royal family. I have also interested in royal stories and news. The writer described a story in an attractive way and you can learn in this link http://www.nounchecker.com/ the skill of writing.T the writing style of the story depends on the well known among the people.

This site is very famous the historical books and articles for getting information to about the royal family. I have an interest in the royal family and their story so I follow the link then able to read the this "book of A Life of the Twentieth Century by Irene Even".

Great post, As getting ready runs with no expiry date. You can check this source and learn and improve yourself by getting from others in your condition. You can teach yourself from old or progressively youngsters.

You gave the great data about the test. For the most part understudies looking about this blog entry and this https://www.paraphrasetool.net/need-reword-a-paragraph-generator/ info is extremely useful for the all dimension of understudies.