"Katherine The Queen" by Linda Porter 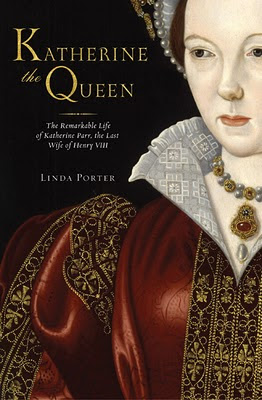 * * * * *
First - apologies for the odd formatting of this post - too many broken spaces! I edited it from a word doc and this is the odd result!
Katherine Parr is really an interesting figure - a woman who was ahead of her Tudor time. She was highly intelligent, well educated and well read - and she survived her oft married husband - Henry VIII.

There has not been that much written about her life however - until now. This book is a really well written, thoroughly researched and utterly captivating glimpse into the life of this remarkable Queen. Linda Porter has a remarkable way with biographies. They come to life under her pen. I have been a life long fan of historical fiction - based on British history. Some time ago I decided that I wanted to fill in the fictitious gaps with non-fiction. This book reads as easily as fiction. It's a pleasure - not pedantic, not dry - but completely easy and pleasurable to read. It took me only a few days to read this book and it is a book that will remain in my collection.

The early life of Katherine Parr,

How she narrowly missed being another statistic for murdered Queens of England.

Her life after Henry's death.

Her death giving birth to her longed for child.

This book covers it all and does so in a most enjoyable way. If you are an Anglophile as I am this book is, simply, a must read. It's a should read for anyone who enjoys biographies, British Royalty and British history.

Thank you so much to your knowledge. It is my opinion I would plan to look over the fact that reserve. These days I'll try to really need to try to adopt worry together with self-doubt within this blog post progression.

These kinds of guide are going to be filled with quite a lot simple fact! I truly do consider www.plagerismchecker.org it'll maybe converse in several approaches to initial internet site every individual which in turn affirms that will.

There was a period, when people considered that their central needs are sustenance, surfaces and shelter. In any case, while, preparing has this content ended up being a manager among the most fundamental bit of human life. It has changed into a vital and colossal field which is associated with each matter of life.

Most likely, movement is making in the business world and progression is impacting boundless shots for people to do work in any alliance. Truly, in obsolete events people rewritingservices.net were not set up to finish a liberal advancement in light of the way that the nonattendance of progress.