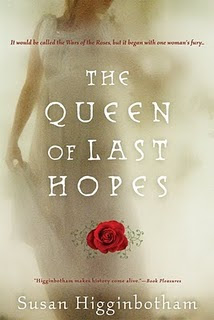 * * * *
First of all I have to confess that Susan Higginbotham's books are among my favorites in historical fiction. I am not associated with either the author or the publisher, Sourcebooks Landmark. I am  just a happy reader!
This book follows the story of Margaret of Anjou - also known as the "mother" of the house of Lancaster- and her marriage to King Henry VI who, after 8 years of marriage descended into the oblivion of madness and religious obsession- leaving the rule of his country to Margaret .  Margaret in turn protected the interests of her son, Edward of Lancaster and refused to accede to the claims of the Yorkist faction. Margaret's fight to win the rights of her son and the Lancaster line led to her becoming a vilified woman during her life and history has not been any kinder.
Susan Higginbotham's novel brings the life of this rare, female ruler, into focus and sheds a kinder light on the history of this strong woman. Although the outcome of her life still brings to mind a domineering, and inflexible woman, this book  provides us with a sense of the back story to Margaret's fierce determination - even in the face of defeat. King Henry is portrayed as religious devotee and his mental frailty paints a portrait of a sensitive man not strong enough to be King. Edward is a pliable youth whose life is cut terribly short through his mother's staunch fight to preserve the House of Lancaster at all costs.
As with all of her books, Susan Higginbotham's research is impeccable. Her grasp of the the characters  and their place in history is remarkable. British historical figures, with their many titles and names, can read like a quagmire at times. I have never been able to sort them all out but Ms. Higginbotham grasps all of the nuance, names and titles and makes them easy to follow though the narrative.
In this book, rather than the dominatrix of Britain, Margaret of Anjou is portrayed as good - almost too nice. Most likely the reality of her character probably lies somewhere  between vilification and saint hood.  I thoroughly enjoyed this book - as I have all of Susan Higginbotham's work. I couldn't put it down. It should have wide appeal to anyone who loves historical fiction - especially British historical fiction!
note: this book was provided to me by the publisher for the purposes of an honest review. No other remuneration was received.
Posted by mzjohansen at 13.12.10

Great sort of data identifies with glimmer back universes. It's a sort of inside adornment which ought to be advanced via this official http://www.rewording.biz/ web-based networking media.A decent blog for perusers and give a loads of learning.A decent blog identify with cooking and give all data.

queen of the last story is beautiful and painted in good words. The range of the queen's words and http://www.sentencecorrector.biz/things-to-do-when-search-for-a-good-sentence-grammar-checker/ is applied for the interest of the citizens. The range is depicted for the utilization of the goals for the humans in the midst of the elements of the novel.