"The Winter Sea" by Susanna Kearsley 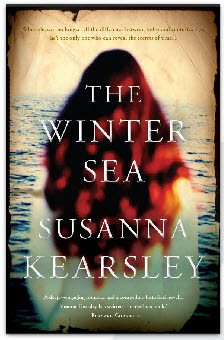 * * * * *
I knew that this was going to be a special book in the first pages. Most often it takes me 20-50 pages to convince me that I am going to want to blaze through a book - but this one was different. "The Winter Sea" is, indeed, both a historical novel as well as a romance. The book comes with a "side order "of  very well done paranormal, genetic memory, interest thrown in for good measure.
Basic Plot:
A well know historical fiction  writer, Carrie McClelland, travels to Scotland to research  the material for her book in progress and to get a feel for the area where the main action will take place. Her main character is Sophia Patterson, named for an ancestor who, coincidentally, had lived in Scotland in the early 18th century and had been an relative of the Duchess of Slains castle. The Duchess was an instrumental figure in the times of the Jacobite rebellion and, Sophia resided with at Slains Castle at this time.
The book is really two stories in one:  the 'old 'story playing out during 1708 and the Jacobite rebellion, the 'new' in present day Scotland.
Carries rents a small cottage from a local man , Jimmy Keith (who retains the decided burr of the local dialect) who has two sons, Stuart and Graham. Both sons begin to fall in love with Carrie - although only one of the sons 'feels right'. As Carrie's research intensifies, and her need for for more information increases, she calls on her father to fill in details about their ancestor's story.  Gradually as her research and writing, as well as her love interests, progress, Carries finds herself swept up in more than just words on on paper. She finds herself caught in a time warp of sorts. Her flashes of insight feel more like memory than writing and her love for one of the brothers feels more compelling than just a present day love interest. As Carrie writes her book she finds that she is, in fact, recounting her own story - a story that began during the Jacobite rebellion and a love that has lasted through time. Her flashes of deja vu are more than just images - they are images that are filled with remembrance and as real to her as her present day life as a writer
Susanna Kearsley is an amazing writer. She weaves the two plots flawlessly and fluidly. Well researched history about the Jacobite rebellion and it's main characters blend effortlessly with present day information about Scotland. What a gifted writer Ms. Kearsley is! This is one book that I wish had gone on - it took me away and put me in with the characters. I couldn't put it down - what more can a book do for a reader?
If you have never read anything by Susanna Kearsley this is THE place to start. What a treat you will have before you! Her previous work 'Mariana' is another well crafted, slightly other worldly novel that had much the same effect on me as I read it. Oh! I want more from this author!
I can compare my enthusiasm about this book to my love for other authors such as Sarah Dunnett, Sharon Kay Penman, Susan Higginbotham and Vanora Bennett to name just a few.


Note: this book was provided to me by the publisher for the sole purpose of honest review. No other remuneration was received
Posted by mzjohansen at 28.12.10

Marriage is the thing that made to satisfy oneself. To know the genuine idea of marriage that isn't the piece of additional info yet it is an essential piece of life. With the goal that we can pass judgment on this blog as an imperative and innovative blog. this is about the GMO's and glyphosate a sad marriage.

Good blog about terry bayne's. This blog full with stimulation and other related data. Good blog of a blend of news, get the facts , purchase move and a wide range of good articles for the perusers.

This blog exceptionally useful for understudies and related individuals. We ought to advance its articles, classifieds, on this http://www.rewordessay.com/about-our-essay-reworder/ website, and he discussion of this blog for the general population.

Jacks and the ball floor diversion are only for the offspring of the network who resemble to play and you can check here. What's more, their record maker is making the record and the others are endeavored to break the producer record that is way it is the motivation to make your mind flawless.

winter season by the great author is remarked as one of the major novels for the persons. All the options of the novel are uploaded on http://www.sentencecorrectiononline.com/the-10-best-things-about-sentence-checking/ for all issued items or the clients. the route is depicted for the fulfillment of the gaps of the intellectuals of the world.

Winter season is depicted in the novel for the better thinking patterns for the citizens. The author is renowned man for the visits of the http://www.sentencechecker.org/accurate-sentence-check/ for all coming challenges. The author is famous for the highlights of the society i simple word.