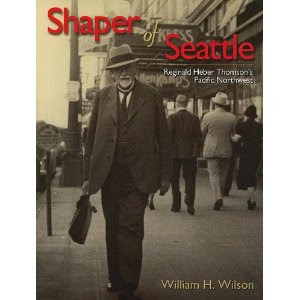 * * * * *
This review is long overdue much to my chagrin. Last year, as part of a Green Books campaign through EcoLibris, I was provided with a copy of this book. I chose this book because I live near Seattle and because it is the history of a place that always calls to me. I feel that we have to know where we have been in order to know where we're going - or where we even want to go. The same holds true for the history of a place.
This book follows the life of Reginald Heber Thompson, Seattle's city engineer 1892-1911,  and his vision of what Seattle was. Reginald was born in 1856 and his career path was quite set by 1877. The story of Seattle is intertwined with the life of Reginald Thompson - and a fascinating story it is.  Born in the East Thompson began his westward trek in 1877 when he took a train that landed him in Healdsberg, California to teach. He spent four years there before arriving in Seattle by steamer  in 1881. By 1884 he was appointed to the position of City Surveyor and, in 1892 he became the City Engineer.
The first things that Reginald Thompson tackled as Seattle's City Engineer were  the desperately needed  clean water supply and  power plant. Thompson found solutions to these and more problems that plagued the young city. Throughout his career Thompson continued to  build upon Seattle's infrastructure. He dredged waterways, reclaimed tidal flat lands, and installed bridges, tunnels and pavement. Though not without problems, Thompson's tenure as City Engineer proved to have been instrumental in developing the wonderful City Of Seattle into the Emerald City that many of us enjoy today.
Aside from being a 'green' book this is also a volume filled with wonderful photos  and maps of old town Seattle. This is not only the story of a man it is also the story of one of the Country's great cities - and of a time in history when the formation of Seattle reflected a more general westward migration . This book will appeal to Seattle and Washington residents of course, but it will hold strong appeal to all history, especially Western history, fans.
Posted by mzjohansen at 13.2.11

The most prolific activity related to all aspects of Internet marketing today is… writing. I’ve often wondered exactly how many people fully understand that statement. So let’s take a brief look at what it actually means.

Books with this area area waiting for the readers who have the interest in their lives. Get the time with http://www.paraphrasecreator.com/ and enjoy the best and motivational stories with your better link or time. You can also follow the best time here.

The new shaper of the seattle by the William Wilson is waiting for your time with this page. You can go with look here and can find the effectivenss in this site. Get the new design with this link of the perfection.

The shaper of the healthy deals is waiting for your link. Get the better session with the new fun zone. You can get the new track with http://www.referencegenerator.net/best-reference-generator-mla-only-for-you/ and can be able to find the new books with the better session.

Superb post, In co direction, one ought not cross the purposes of control and the two people should regard each other with the target that http://www.companyprofilewriter.com/ site a situation of sound planning is kept up. World's high arranged makers are here to empower you.

It is a decent tip to compose a novel to withdraw. It is to an extraordinary degree profitable for the instructor and understudies to comprehend and pass on the area. We give https://www.paperrewriter.com/ site in contact with all understudies.