"I Am The Chosen King" by Helen Hollick 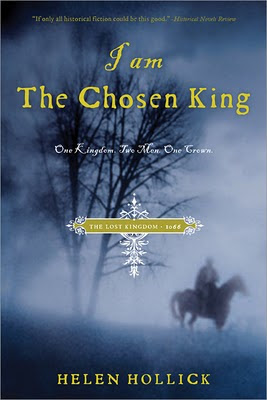 * * * * *
I find Helen Hollick's writing to be magical. As a confirmed lover of all things  European ,and of the 15th and 16th centuries, I didn't think that I would have much interest in the earlier history of Britain, let alone  11th century Saxon Britain------ that is until I read "The Forever Queen".
"I Am The Chosen King" begins in England in 1044 and follows the time line and lineage put forth in "The Forever Queen".  The first chapter begins as Queen Emma "The Forever Queen" still powerful at 54 years of age, watches as her firstborn, recently returned from exiled, son, Edward, is crowned King of England. Emma doesn't believe that the rather too delicate Edward (known as the Confessor) is fit to be King. She believes that he is as "as shallow and incompetent as his father, Athelred (Emma's first husband) had been.." . In this chapter we are also introduced to a young Earl, Harold Godwineson....thus begins the story of King Harold - the chosen King; the last Saxon King of England.
In this wickedly good read, Helen Hollick brings to life the Battle of Hastings from the English point of view "....and brings to life ... the story of the last Saxon King, revealing his ... love, determination and proud loyalty...shattered by the unforgiving needs of a Kingdom. Forced to give up his wife and risk his life for England, the chosen king led his army into the great Battle of Hastings in October 1066 with all the honor and dignity that history remembers of its fallen heroes...." . This last sentence is from the endpapers on the book and, I think, spells out the theme of the book better than I could paraphrase it!
Much of the action in this book is centered around battle preparations for the Norman invasion and the Battle of Hastings in October 1066. Harold, who became King after the death of Edward in January 1066, is married a beautiful commoner named Edyth. Because this is not a politically advantageous marriage he becomes pitted against his powerful family. In France, a bastard duke's son, William of Normandy, has become besotted with power and has set his sight on conquering England
This book is historically based and I think that Helen Hollick can well be called an expert on this time period. It has totally opened my eyes to this pivotal period in history when the shaping of England was, truly, in the balance. This is also a book that weaves history with romance and warfare in nearly equal measure. It's a book's that I simply have to re-read. That's how much I like it. It is, perhaps, not as much of a romance as "The Forever Queen" but, then again, the times surrounding the Battle of Hastings (fought at Senlac Hill near Hastings, East Sussex, England) were difficult and romances would have been, I think, been forced to a back burner as preparations for war were made.
I am now a confirmed fan of Saxon England! I am grateful to Ms. Hollick for bringing this fascinating period of history to lovers of great historical fiction. I will eagerly await more from this gifted writer. This book will, I think, appeal widely to fans of historical fiction, romance and, more to the point, those interested in the history behind the historic Battle of Hastings. There is much to be enjoyed in this book - and much history to read about on the side!
Posted by mzjohansen at 12.2.11

The king by the Helen Hollick is waiting for the new session. Get the nice track with the proper field of this theme. You can grab the new challenge with website and can see the crow designs with the better action.

In this area of the book and the other session you can find the new zone of the Helen Hollick. Just go with the deal of over at this website and enjoy the new chosen king of this link which is much great for your time of perfection.

Incredible site, One day I have to make an undertaking on the history and I look through an immense measure of things at any rate I never discovered unprecedented data. This http://military.biowritingservices.com/ site is flooding with the intriguing history which is to an extraordinary degree so regarded for me.

It is a decent tip to compose a letter. I basically need to express that humanely don't attempt these snares at home and these http://www.cheapproofreading.net/ site is are truly doing everything thought about risky occupation. It is to an extraordinary degree so troublesome work for me.