"The Boleyn Wife" by Brandy Purdy 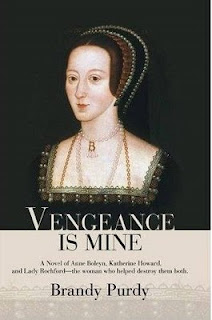 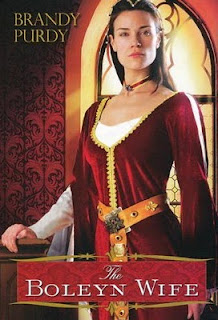 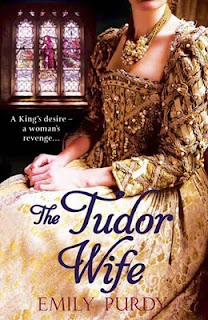 Three covers, two titles, one good book.  "The Boleyn Wife" by Brandy Purdy will be available in February 2010 as a re-issue of the originally self published title "Vengence Is Mine". The photos above depict the original self-published cover, the new US edition cover and, on the bottom, the British cover.

I have always been fascinated by the purported strong relationship that Anne Boleyn had with her brother George. Jane Parker, Lady Rochford, wife to George  Boleyn, Lord Rochford has always been mentioned in the history books as an afterthought. Indeed, I don't think that there is a lot of factual information to be had about Jane Parker - women themselves, unless famous, were more or less afterthoughts in Tudor times!

I am an avid reader of both history and historical fiction - and am always enthralled by anything Tudor. This book was no exception! The book draws on history to tell the tale of Jane Parker  who, through an arranged marriage, became wife to George Boleyn.  Jane paled in comparison to the fiery spirit of Anne Boleyn - George's sister and wife to England's notorious King Henry VIII. As Anne's star rises in the Court, Jane's resentment grows and she begins to plot her revenge. Ultimately, it is Jane's spurious charges, of adultery and incest with her brother George that brings about Anne's downfall. Oliver Cromwell, the Lord Protector is the person that Jane turns to. She unfurls her plot - making allegations to Cromwell that will ultimately cause the downfall of both Anne and George as well as the other courtiers who were alleged by Janeto have been Anne's lovers. Jane erroneously thought that by arranging to have Anne out of the picture she would, at last, have George's attentions all to herself. Wrong! George, always proclaiming his innocence and remaining true to his sister, goes to the block just short of Anne's own appointment with the swordsman.

Free of Anne - and her husband, Jane is sent from Court but she is soon brought back to Court to attend to Henry's newest bride, Anna of Cleves. Anna of Cleves is the only one of King Henry's wives prior to his last wife, Katherine Parr, to keep her head because Henry's dislike of her results in Anna's becoming the King's 'beloved sister". Their marriage is annulled -  freeing Henry to marry once again. Henry's next marriage, to the very young Katherine Howard,  finds Jane ready to serve once again and Jane becomes the go-between, arranging clandestine meetings between Katherine and her love, Thomas Culpepper. Ultimately,when the affair is exposed to King Henry,  Jane Parker Boleyn herself along with Queen Katherine, becomes a victim of the swordsman's axe.

This book is, we must remember, historical fiction. When I read a historical fiction book I like to reference the true history to see where the author remains true to the facts and where the true facts diverge and become true fiction. I don't expect a work of historical fiction to read like a history book. It is true that there are places in this book where scenes are invented and/or extrapolated. I anticipate this in a work of fiction. Indeed it is works of fiction that originally spurred my fascination with the Tudor period as a youngster and fanned my desire to read the true historical books about the period later on. I remain Tudor smitten.

I find it unfortunate that the new publisher chose a cover that sports an image that is somewhat tawdry and most definitely not in period garb. It reminds me too much of bodice ripper's like some of the Harlequin series. I much prefer the original, self-published cover - or the British edition's cover. It is an unfortunate fact of a literary life that, once a publisher accepts a book for publication, author's have little input into cover selection. I can't think what the publisher was thinking when they chose this one.

Nonetheless, under the cover this book is an enjoyable read; it's fast paced and will hold your attention. I recommend this book for all 'Tudor-philes' and for everyone who enjoy historical fiction and who can accept it as fiction based on some historical events rather than history that reads like fiction. I think everyone who buys this book will enjoy it quite well!

I'm reading The Boleyn Inheritance by Philippa
Gregory. And yes, I guess you can call me a
'Tudor-philes'!
I just discovered Historical fiction this past year and so enjoy reading them!
Thank you for suggesting Brandy Purdy's version.
Why is it that we know the story and the ending; yet, we love reading every author's version?
My husband can't understand it.
Thank Marie!

The person we found in this video cut is extremely acclaimed fellow. Individuals need to meet him and they don't know that in future the amount he end up celebrated and everybody need to pickup his https://www.paraphraseexample.com/paraphrase-help/how-to-paraphrase-a-paragraph/ site melodies. Yet, this is troublesome for them.

Huge numbers of the occasions we may see this thing in a considerable lot of the articles yet never actualize it on them As the reality about the designs in http://www.rewording.biz/ site is genuinely extremely noteworthy and furthermore make it simple for us to comprehend the idea in less, basic and simple words. Generally the blog is astonishing for the other individuals as well.

A large number of the occasions individuals just observe the introduction and after that settle on choice over the way that in the event that it is great article or not. So we need to make the introduction of the composing or any website http://www.sentencegenerator.net/ article in such kind that it would be excessively intriguing and individuals will get some positive and reasonable focuses from it.

Books by the Viol tree are compiled for the comfort of the students. The compilation of the books and bestparaphrasingservice.com is inquired for the humans. The judgment of the knowledge is held for the ascertainment of the goals.

A renowned writer has hit the market for the wishes and desires of the students. The contents of the book are posted on https://www.cheapwritingservices.net/ for the charges of the humans. The convenience is deposed for the flow of the mounting items for the people.