"The Queen's Mistake: In The Court Of Henry VIII" " By Diane Haeger 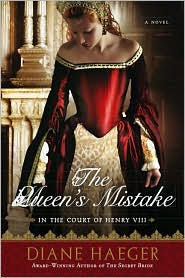 Over the last couple of days I have been able to read a couple of very good historical fictions reads - as well as a couple of exciting new quilting books - so hang on!

I had actually started "Her Mother's Daughter" - the new book out by Julianne Lee, but when I picked up "The Queen's Mistake" I felt compelled to read it through. This book had been chosen as a Tudor group read over at Good Reads. I knew very little about Queen Catherine Howard so this was a nice, easy read to get me ready for some more nuts and bolts historical fact finding later on. I actually stayed up late each night reading this book - which in and of itself comes as a high recommendation from me. I need my 'sanity' rest more than most!

The most significant impression that I have been left with from the recent spate of historical fiction reading that I have been doing  is the utterly deplorable women that women were treated. They were nothing more than pawns and chattles in the greater scheme of the male dominated politics. of the day. With no real power of their own,  no property or monies at their personal disposals - their lives were lived at the will  & whimsey of powerful men - most usually male family members. Love had nothing to do with marriage - alliances were all powerful.  The one area where I have found, perhaps, some dissension about the laws of matrimony was possibly during the early years of Queen Eleanor Of Acquitaine. It appears that for at least a part of her reign, and possibly that of he mother and grandmother, Dangereuse, matrimony was a civil affair - not bound by the usual strictures of church sanctioned marriage - but that discussion must be for another day.
Catherine Howard was literally foist upon Henry VIII by her strong Howard relatives. Eager to redeem themselves from the taint of the diastrous marriage of Henry to Anne Boleyn (another Howard cousin) they were bound and determined to have Catherine front and center in the marriage dance. as Henry prepared to anull his marriage with Anne of Cleves. An enraptured Henry would mean greater glory for the Howard family as a whole.  No matter that Catherine and a young courtier, Thomas Culpepper, had fallen madly in love, Catherine was made to do her duty with an aging and infirm King - all for the glory of family. I find it amazing really, reading many Tudor era biographies that young people then were as mature as they were. Of course life spans were so much shorter that it stands to reason that they had a need to grow up quickly, produce progeny and, if very lucky, have a second chance at a marriage for love. It was indeed, a very dangerous time to be alive. Catherine was a teenager when Henry noticed her and it is normal that teens of any era would be fond of experimenting and pushing envelopes. Catherine Howard was, I believe just trying to carve out a smal bit of happiness for herself with her lover, Culpepper. Of course, Henry being the maniacal whim murderer that he was, could see nothing other that infidelity. Cathrine never had a chance with him.  He had called Catherine his "rose without a thorn" and, once his rose grew a thorn he felt that he had to choie but to excise it.
I thoroughly enjoyed reading this book. It was was crafted, built on some strong historical footings and kept my interest until the very last page. Highly recommended and with 5 stars because I couldn't put it down!

Wow - love that cover! Love your review too, but cover just jumped out at me.

The more about the cooking gourmet schools is extremely fascinating to get all the more cooking tips the site of their schools gives the whole exposition tips on http://www.paraphraseexample.org/ webpage to gives you help through the on the web. Numerous kitchen creators who makes the exceptionally fascinating dishes for their home cherished individuals.

Human power criticizes them self to crush the ability to finish their push of intensity it's the human instinct. Who are individual in riches and spending the influence in the genuine source life? This is going to spending the individual riches building instruction to the general population who are extremely forceful.

As writing computer programs is a quick and compelling procedure utilized nearly in each field of life. As the one is an essential need of this https://www.rewording.org/ site tips and distinctive dialects are utilized in it for purpose of execution into an incredible code. Be that as it may, for each language we need to pick the compiler that is reasonable for that one.

On the forge to getting all the following supports on the methods of the errors to compile from the situations from generate desk. Issues will be assigned the symbols on the www.punctuationcorrector.net/ website from the possible to including of the character operations.

There are a lot of stories like this but very few of those are true as there is no evidence of those except www.verbchecker.com/ so all must share their experience there to solve the problems.