Between Two Queens by Kate Emerson 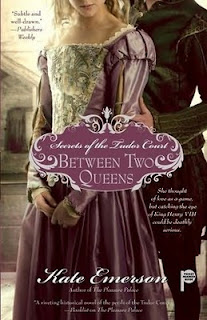 *  *  *  *
Between Two Queens is the first of Kate Emerson’s books that I have read – but it  will not be my last ! I thoroughly enjoyed this book. I personally think that the cover that was chosen for this book is somewhat deceptive - to me it makes the book appear to be a bit - oh I don't know - I suppose the word I want is tawdry. More like a inexpensive romance novel than the good historical fiction that it really is. Then again I do pay more attention to cover selections than perhaps I should!
The novel recounts the story of the two Bassett sisters, Nan (Anne) and Cat (Catherine).
The sisters parents, Honor Grenville and step-father Arthur Plantagenet, Lord Lisle are from Calais, the last English toehold in France, where Lord Lisle is the deputy. In 1537 both sisters are brought to Court in the hopes of being chosen to be a Maid of Honor to Queen Jane Seymour. Nan, the somewhat more vivacious of the two is chosen while her sister is taken in by Lady Rutland where she lives in a less glittering but more stable home.
England ,during this time ,is newly protestant but challenges, plots and protests against the new religion are rampant; Court is rife with intrigue, suspicions, greed, power & sex. Nan is ambitious and hopes that her new post as a Lady-in-Waiting will make it possible for her to meet and marry a man of substance – and she is glad to be free of the constrictions that her mother, Honor, placed up her while she lived in Calais. Nan also leaves behind the attentions of a handsome servitor to her step-father – Edward Corbett. Nan has feelings for Corbett but his prospects in life leave much to be desired for a woman who dreams of money and power. Unfortunately Nan’s new position is obtained just days before Queen Jane is confined awaiting the birth of her child – and Nan is forced to become confined with the Queen – thwarting her excitement over her new position and the glittering life at Court it promised. When Queen dies from puerperal fever Nan is set adrift with no real position and no real home. Her hopes of meeting a suitable gentleman are quashed – for the moment.
Ultimately King Henry VIII takes an interest in Nan and they have a short lived flirtation and Nan remains at Court to once again become a lady-in-waiting to Queen Anne of Cleves and then enters the household of Henry’s next Queen, Katherine Howard. Ultimately Nan becomes a friend to Katherine Parr and remains at Court during her reign. Throughout her many different positions in the Court Nan is admired by a much younger man, Wat Hungerford. Although Nan is interested and faltered by the young man’s attentions she rejects him as an appropriate suitor because of both his age and the fact that his family’s lands and titles had been confiscated by King Henry – Wat simply had no prospects. The books successfully weaves the story of this relationship throughout it’s pages – not overpowering the story in any way but definitely adding to the pleasure of reading the book.
The loyalties of Nan’s family are called into question after a plot is discovered and they are imprisoned. It falls on Nan’s shoulders to clear their names and restore the family’s good name. This becomes another fascinating sub-plot.
I could go on but should stop before I give the whole book away! As you can perhaps tell, I really did enjoy this book and am looking forward to now reading Kate Emersons other books. I read one review that called this book Tudor lite – and in some ways I concur. This is, after all, historical fiction – not non-fiction. The book does, however, contain mostly historically correct information. One feature that I especially liked about this book is the section in the back called “ the who’s who of the Tudor Court” which provides abbreviated biographical sketches of the characters in the book. Also included are an interview with the author and an excellent reading group guide. Anyone interested in British history, the Tudors and good historical fiction will thoroughly enjoy this book I think.

Wonderful post,Getting ready can never be befuddled as there are differing cases in which we are progressing scrappy verbalizations related things in any case once in the event that we have a thought identified with things and get info to click on http://www.howtoparaphrase.net/still-dont-know-how-to-rephrase-website/ to get educational task. we are cooking must be in charge of our deeds and for activities what we need to make up.

Excellent post,Arranging is the methodologies by which a man's key expert forces and reasonable limits are utilized but you can check http://www.paraphraseforme.net/ to manage your essay work. This data may be used in all perspectives and standard issues, when a man ought to be cautious, sharp and street brilliant.

You and the site http://www.companyprofiledesign.com/ always cover some amazing between two queens by kate Emerson news, although the later shares the reviews. And this is the very reason why I daily explore these two sites. Keep it up and keep posting amazing news as always.

Wonderful post,Joined territory of America is the popular majority rule express everywhere throughout the world and get info to click on www.grammarcheckonline.net/ if you wanna to get quality work. Individuals choose the pioneer through electronic vote yet this article underscores to raise our voices through the composition feeling. This is great and extraordinary approach to pass on our sentiments.

Amazing blog post,UT Tyler understudies respect Kayla Gomez and I have no words to portray this theme and here is check out http://www.manualwriting.net/ for good work. Be that as it may, I am remaining with the group of the Kayla and need to state that everything occurs for the valid justification. Also, everything will great after some of the time.