" To Defy A King" By Elizabeth Chadwick 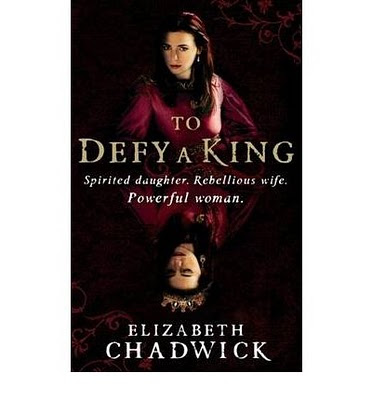 * * * * *
I must admit to being a huge Elizabeth Chadwick fan - which is why I ordered this prior to it's release in the States. Check out the Book Depository for tittles that you simply can't wait to read. They have excellent service, great selection and FREE shipping no less!
I loved this book and read it while I was recuperating. It was the perfect book for getting lost in another time and place! It recounts the life of Mahelt Marshall - eldest daughter of greatest knight of all William Marshall. The action takes place during the reign of King John - when, it seems everyone, even those most loyal to the crown as William Marshall was, are suspected of treason for one reason or another. Quite honestly this book made me want to read more about King John because he comes across as a neurotic, paranoid kind of man who thinks that all of his subjects are out to over through him (hummmm - maybe they were - that might make sense come to think of it!). He holds two of William Marshal's sons captives as surety for William's allegiance. I got bad vibes about this King just from reading the book.
With his sons held captive William Marshall arranges an advantageous marriage for his beloved daughter Mahelt to Hugh Bigod, son of the Earl of Norfolk Roger Bigod. This book is the story of Mahelt's marriage, and, in a way, of her "coming of age" when women were thought of as little more than breeding machines. The book covers the years 1204 to 1217. The books skillfully tells the tale of the Mahelt's family allegiance to her father came into conflict to her marriage family's ambitions at times.  He marriage to Hugh is tested as as the vicissitudes and tyranny of John's reign causes  both as well as religious upheaval within the country. Keeping one's footing in the good graces of the Court becomes a slippery slope as all of the main characters attempt to hang on to to what they have and stay alive in the process.
There is something about Elizabeth Chadwick's work that reels me in and hold onto my consciousness as I read her books. I am transported to another time - when the place of women was so much different than it is today. Ms. Chadwick's book's, I believe, really do make the 13th century come alive in a way that some other books of the same period fail to do. I believe that this book is stong enough to be read without having read Md. Chadwick's earlier books but it is also true that if you have already read "The Greatest Knight", "The Scarlet Lion" or the "Time of Singing" you might have a better grasp of the historical background as a whole. One thing I think I can assure you of is that if you love historical fiction and begin with this book - you will be looking for each and every other book that Ms. Chadwick has written before you close this book on the last page! Fabulous book

Passages to the Past said...

Yeah! Great review Marie! I can't wait to get my teeth into this book and thanks to YOU I get to do that a lot sooner than I thought :) Thanks again!

And I agree whole-heartedly that Chadwick's books are great transports to another place and time. I know I always feel like a fly on the wall, like I'm really there when reading her books!

So glad you liked it!

I loved this book as well! Chadwick is right up there with Sharon Kay Penman as my favorite authors.

Another confirmed Chadwick here! So glad you enjoyed it!

Latest PDAs are in like manner helping the present understudies as understudies can find each troublesome request's answer very http://www.paraphrasemypaper.com/ fundamentally and viably on these. If there isn't any educator in class for help thusly, understudies can get the help from their PDA to decrease the inconvenience.

You have done well by giving us such an accommodating article to keep up the extraordinary prosperity http://www.paraphraser.biz/ in each age. You should keep posting such articles regarding the matter of mental and physical prosperity a similar number of people like me get help from these.

Life is incredibly dear to everyone and everyone can effectively live alive. Thusly, presence without incredible physical and check more info mental prosperity is awful and isn't pleasant. Extraordinary prosperity is immense to value the presence well thusly, people should keep doing morning walk.

Our www.sentencecorrection.biz/ really helps to take you to the right online platform for sentence correction. It guareanteed your work with high-quality services of content editing.

The websites of www.sentencestructure.org are available here to provide you high quality content work. There you have the clear and obvious help that these grammar checkers can give you!