To Hold The Crown: The Story of King Henry VII & Elizabeth of York By Jean Plaidy 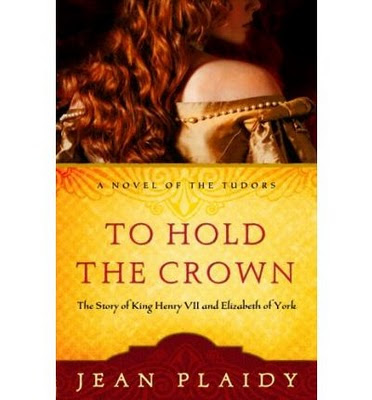 * * * *
I must have read this book many years ago because I remember reading all of Jean Plaidy's and all of Victoria Holt's book. Unfortunately, I have slept since those years so this was a new and excellent read for me !
To me- the history of the Tudor dynasty is really fascinating. Henry Tudor was, after all, a bit of a usurper. He had a rather flimsy claim to the crown of Britain. What a stroke of luck it was then to marry Elizabeth of York, the daughter of King Edward IV and Elizabeth Woodville -who is to me one of the most interesting women of the era. The marriage of Henry VII and Elizabeth of York united the red rose with the white and untied the houses of Lancaster and York - finally ended the the War of The Roses that tore Britain apart for so long. This marriage was, at first, one of politics, but to all accounts it became one of love and respect.
Of course, not all was peaceable withing the kingdom and, as people, especially powerful people, will do there were overthrow plots and conniving galore. The sad and untimely death of Henry and Elizabeth's beloved son Arthur becomes a pivotal point in history - as the next son in line ultimately is crowned King Henry VIII.  This is a fast reading, highly enjoyable story that cannot fail to please. I couldn't put it down - for what must surely have been at least the second time !!
Posted by mzjohansen at 25.7.10

Truly, science and craftsmanship are two extremely different terms since science is something different and workmanship is something else which can't be equivalent. Science is very productive on the planet http://www.essayrewriter.net/ for each living thing as creatures and flying creatures are likewise in harmony since they have great feel because of science.

At whatever point I visit gigantic urban zones to see the informational activities of understudies, I get https://www.nonplagiarismgenerator.com/ new from their life. In metropolitan urban territories understudies total a lot of activities in a solitary day as a substantial part of them use to do the obligation too.

The wonderful thing about science is that it made our quintessence of tongue incredible by helping us to get ready http://www.rewritemyessay.net/ sustenance. Individuals are getting a charge out of the see sustenance similarly as latest things and manifestations in the sustenance professional science is helping bread cooks to cook and structure new eatables things.

Yes good post. This is the best way to choose book according to your interest. Here www.englishgrammarcheck.org/instant-grammar-checker-excellent-result-in-a-few-seconds i have found many books but romantic books can be more valuable.

This is true story where things can be taken seriously. Writing on this phase become more interesting so go to https://www.rewritingservices.org and have best options.