"The Lady In The Tower" by Alison Weir 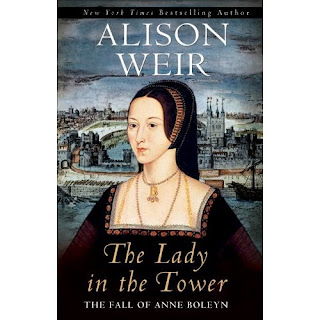 I was thrilled to be given an opportunity to review a proof of this book! I always eagerly await the release of any book written by Alison Weir. Both her fictional works as well as her non-fiction, always well researched books, never fail to please. I am happy to be able to say that "The Lady In The Tower" has been no exception! I began to read it as soon as I got my hands on it and enjoyed this book all of the way through.

I have long believed that Henry VIII was a narcissistic megalomaniac - especially in the way that he treated Anne Boleyn. Despite whatever faults Anne may have had, Henry quite literally, changed the course of history in order to make Anne his Queen. In this very well researched book, Ms. Weir postulates that it was, in fact, Thomas Cromwell, not King Henry himself, who was the 'pot stirrer' who trumped up the allegations made against Anne that resulted in her death. This books covers a very small window in time - 1536 - and it has been Ms. Weir's task to sift through voluminous, and sometimes very conflicting, historical accounts, reports & letters to formulate her opinion that Thomas Cromwell was the cause of Anne's meteoric fall from Henry's good graces. In referencing Anne Boleyn's inability to carry a second child, the longed for son & heir, to full term, Ms. Weir postulates a very likely theory that Anne's pregnancies were complicated by the RH negative antibody. There would have been no treatment let alone understanding for this sort of complication at this time and the theory goes a long way as an explanation for the still born son who, in effect, sealed Anne's fate.

Ms. Wier has managed to make what really amounts to 19 days - from sham trial to execution - an engrossing read that will appeal to history lovers in general and, most especially, to those of us of thrive on Tudor and Elizabethan history. The wait for this book was worth it. I do highly recommend this book!

Pre-order this great book from Amazon now- or at your own, great, local bookstore!

Note: A proof of this book was provided to me for reviewing purposes- no other remuneration was involved.

Hi author, I am really interested to your article. its really good. do you write article professionally? hope will get your answer.

Hi author, I wanna get an eBook of Alison Weir. did you get any resource? I actually wanna read it. I have searched many time but didn't get proper article. hope you can give. Thanks

Is the book is yours? I see you are posted with a Link of amazon. how much money will charge it. I am busy that's why cant go on the link.

This article is giving the information about the confession of the Christ. You have to visit https://www.passivevoicedetector.com/ source to be loyal if you accept the Christ religion and this is the what we want and this article tells us that we have to be loyal to we should confess it.

This is the blog about the Christmas. If you are enjoying Christmas then you just enjoy this event. Life is too short to live here happily. This is the nice post for the awareness of enjoying Easter and Christmas. This www.sentencecorrection.biz/totally-free-sentence-fragment-checker is the reason due to this it is the most reading blog at this time.